From all of us at Pride of Maui, we look forward to meeting you on one of our Maui whale watching tours. Enjoy and a hui hou!

Humpback Whales live in all of the world’s oceans and swim great distances during their seasonal migrations. Some travel 5,000 miles from their summertime feeding locations to their winter mating and calving areas near Hawaii. In the North Pacific Humpback Whale groups, some of the healthiest and strongest whales make the 3,500-mile trip from Alaska to Hawaii in just 28 days.

The Hawaiian population of humpback whales travels to the North Pacific to feed during the spring, summer, and autumn seasons. They spend their time feeding around the Aleutian Islands, the Bering Sea, Southeast Alaska, the Gulf of Alaska, and the northern parts of British Columbia. At the end of autumn, they return to the tropical waters of the Hawaiian Islands, and this is where they mate.

The whales also give birth near the main islands of Hawaii, with incredibly dense populations of calves being born in Maui’s warm waters. The warm waters are ideal for newborn calves and mothers conserving their resources and energy. Other pods of humpback whales also migrate to Hawaii or pass through the archipelago. Some North Pacific Humpback Whale pods travel to Mexico and Central American coastlines.

Being in the presence of humpback whales and seeing their natural beauty in person is an experience to treasure for a lifetime. 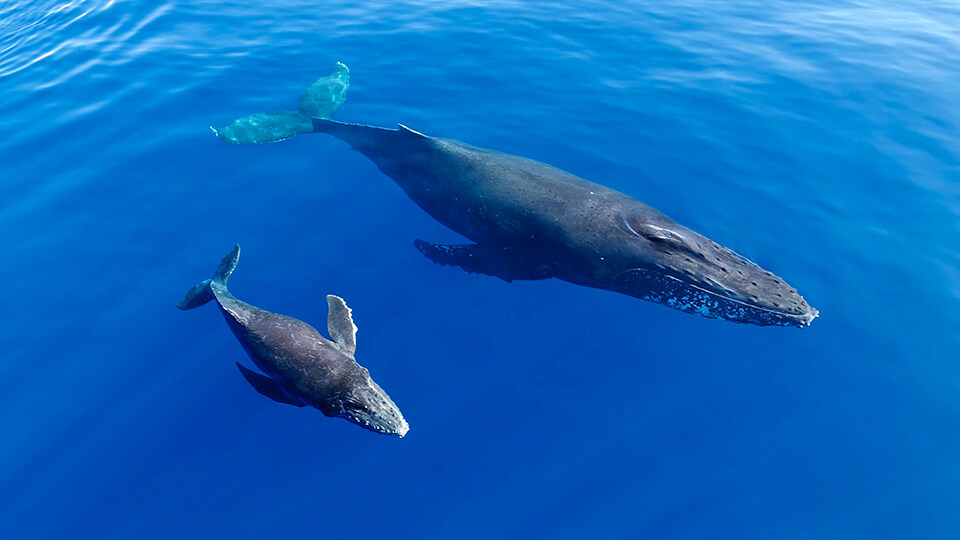 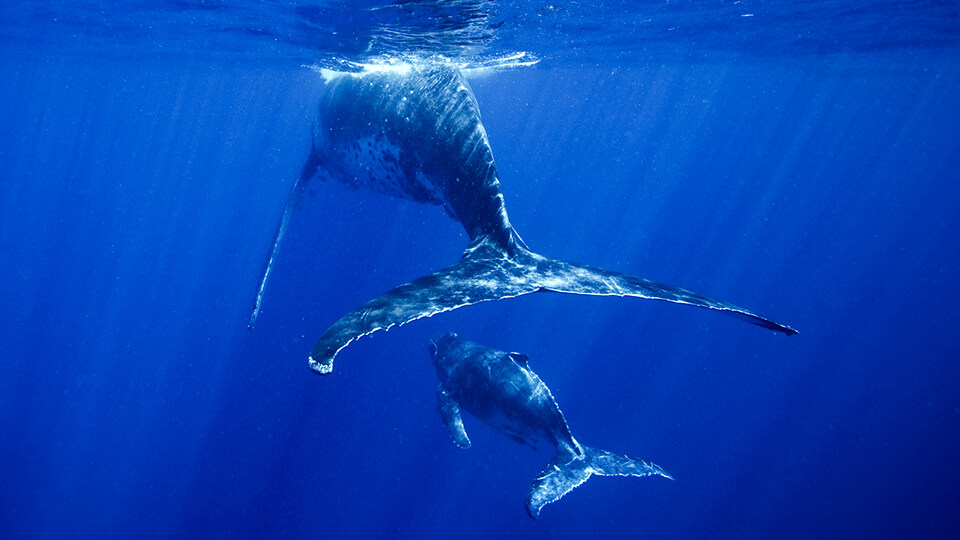 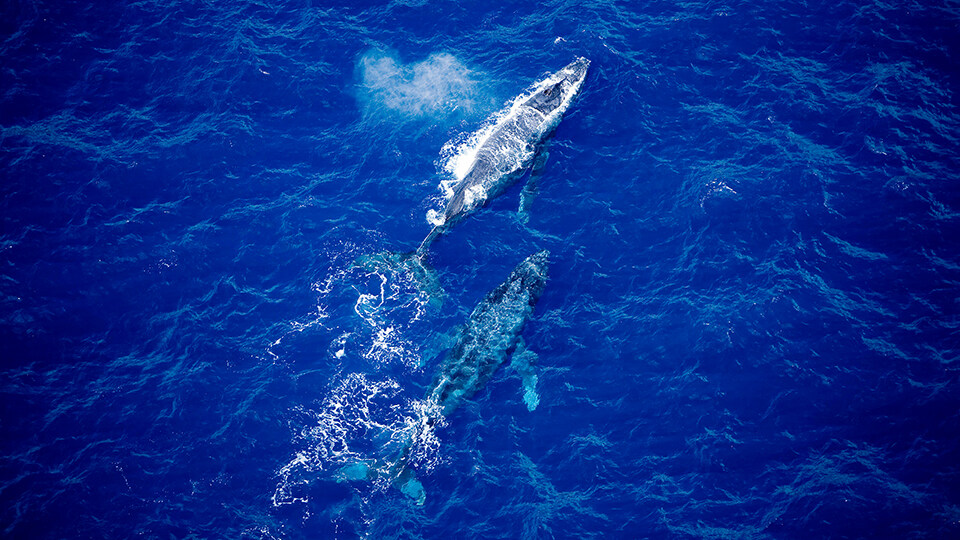 A humpback whale’s flipper has a large ball at each end, making it easy for researchers to differentiate humpback whales from other whales. Although humpback whales are primarily gray/black, they also have bright white areas on their bellies, throats, and flukes.

Humpback whales eat during the summertime. They eat up to one and one-half tons of small schools of fish every day. Their mouths contain baleen plates, which allow them to filter fish from the water when they close their mouths. Humpback whales also eat a lot of krill. This diet of small fish and krill builds the whales’ fat reserves. 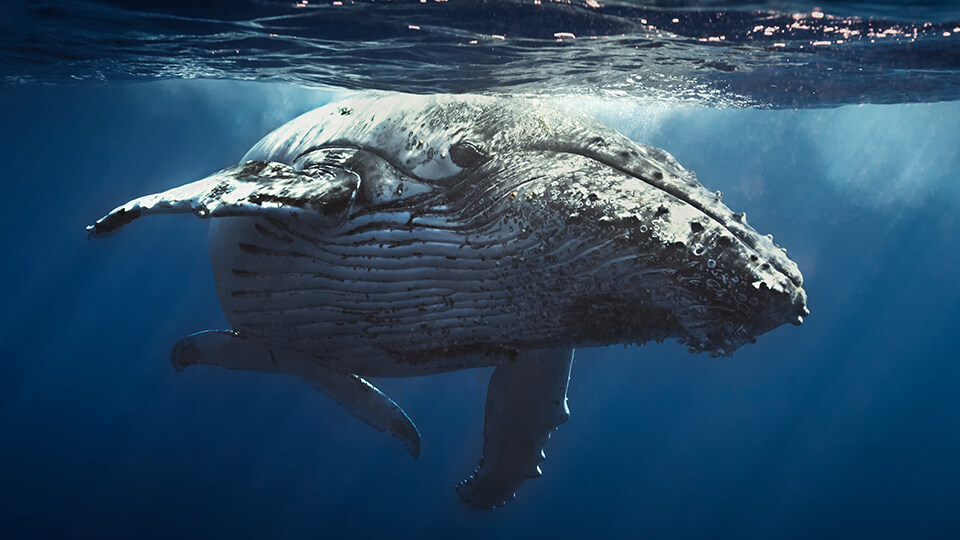 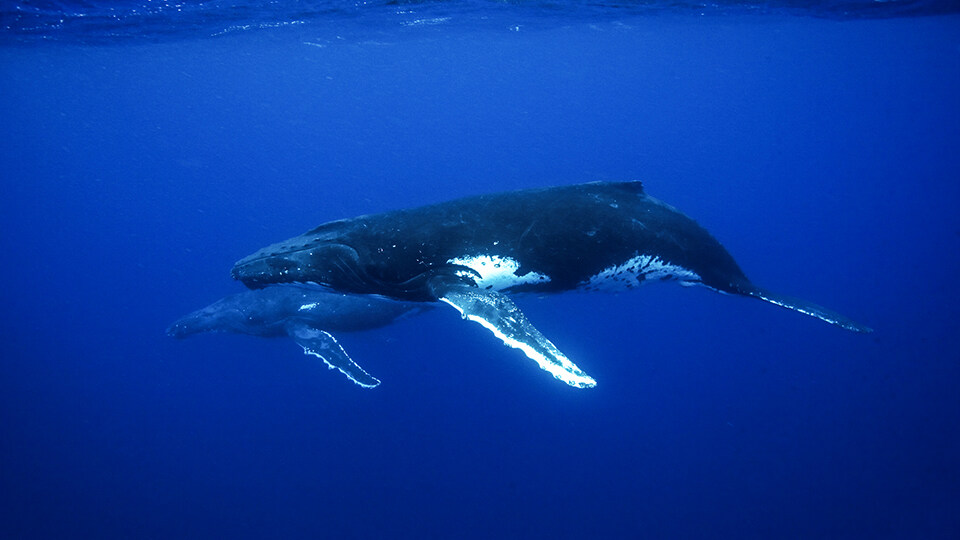 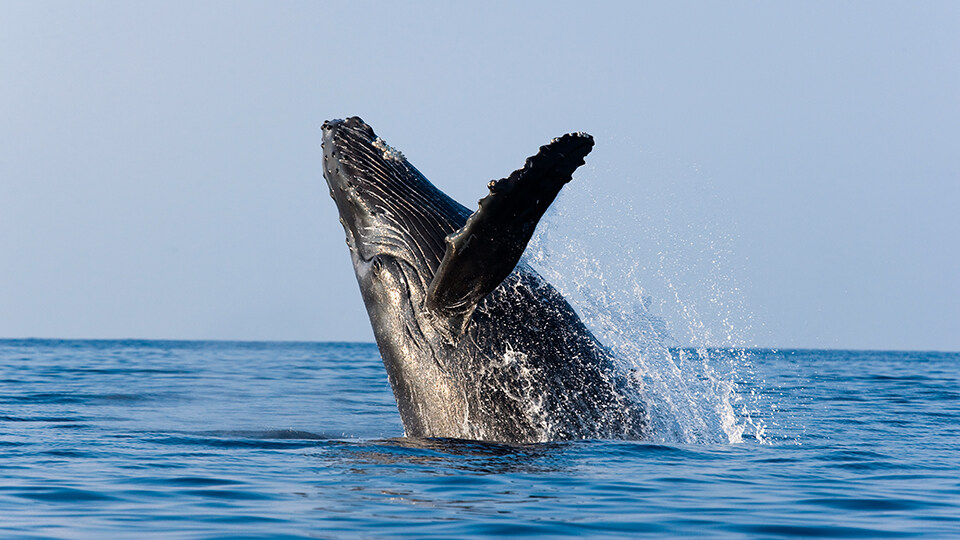 Adult male humpback whales compete aggressively to mate with mature females. Females reach estrus at around five years of age, while males become sexually mature at about seven. One male typically mates with multiple females of reproductive age during the wintertime. The gestational period is about 11 to 12 months, and the calves will be born in the same place where they were conceived. Since Maui’s whale pods return to their birthplace every year, each generation is born in the same place as their parents.

The historical annual journey to breed and calve in Maui benefits humpback whales because they have few natural predators; the biggest threat to them is getting struck by a ship. Thankfully the clear water surrounding the Hawaiian Islands creates a safer environment for newborn calves. Maui and the Hawaiian islands also boast variable water depths, which helps the calves learn how to swim and navigate. A mature female usually has a calf every two to three years, with conception prevented by lactation during the interim years.

View More about The Whales Breed in
Warm Hawaiian Waters 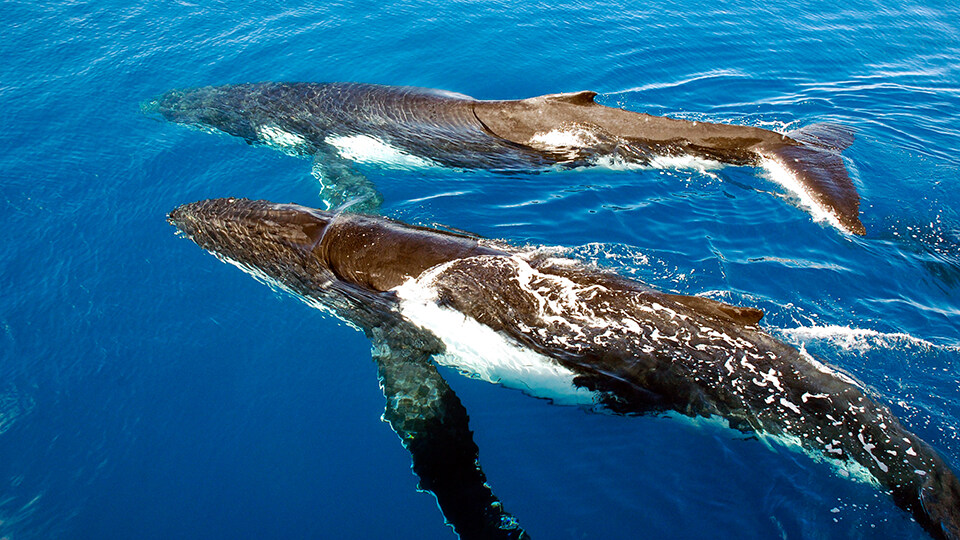 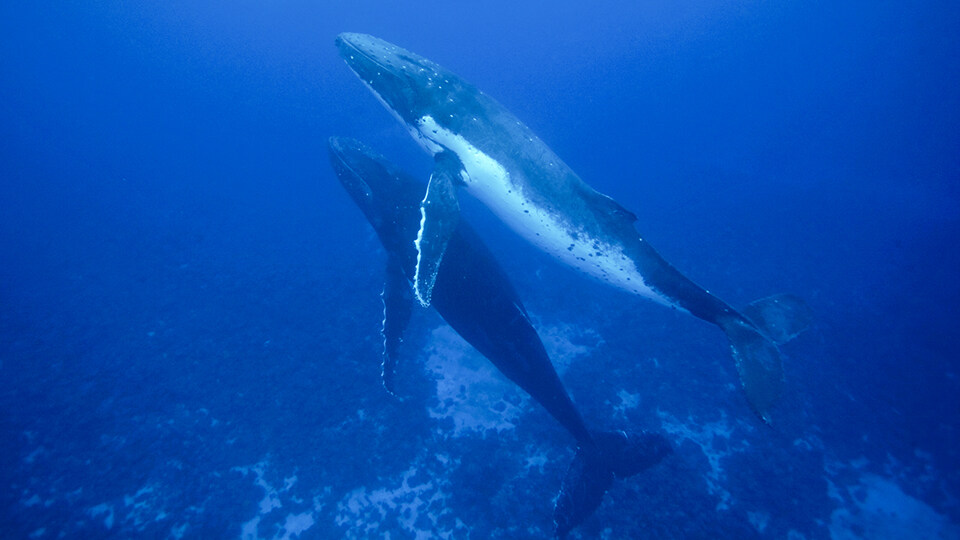 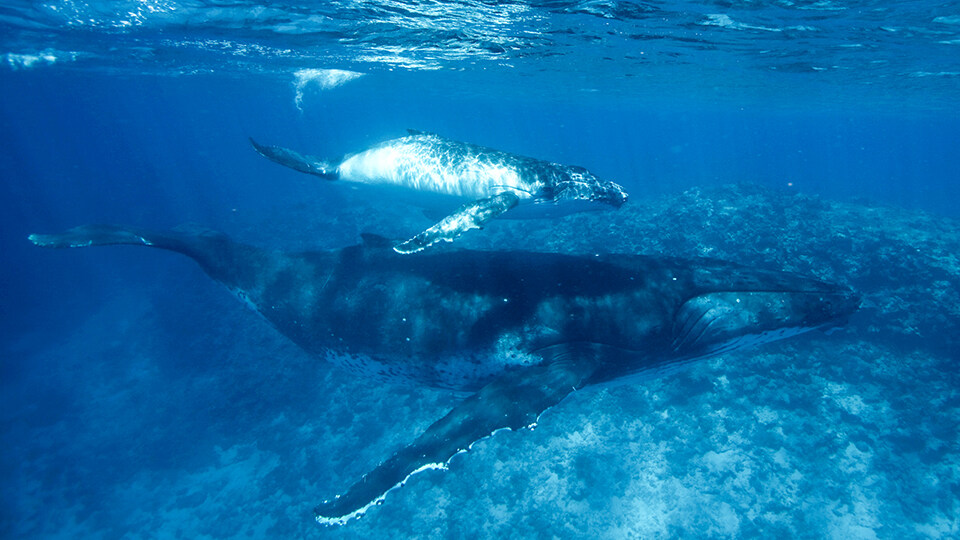 Maui’s baby humpback whales stick closely to their mothers. Their mothers frequently touch them with flippers in an affectionate manner, much like a human mother would with her baby. When a calf is born, it weighs about 1.5 tons. Humpback whales are mammals, and the mothers secrete rich, fatty milk from their mammary glands. Humpback whale milk is 40% to 60% fat, and it’s all that a baby whale will eat for the first six to 10 months. This nursing period helps build the calf’s fat stores so it can survive in the Arctic waters during the annual migration north.

Groups of humpback whale mothers and calves often swim close to each other for several months after the calves are born. This offers additional protection for the more vulnerable calves. Although there are not many predators of humpback whales near the Hawaiian Islands, they do encounter some during their annual migration north. These predators include killer whales and large sharks, who are more likely to attack the smaller calves than the mature males and females, although predatory attacks on humpback whales in general are rare. The calves and adults are more likely to die entangled in equipment or from vessel strikes. 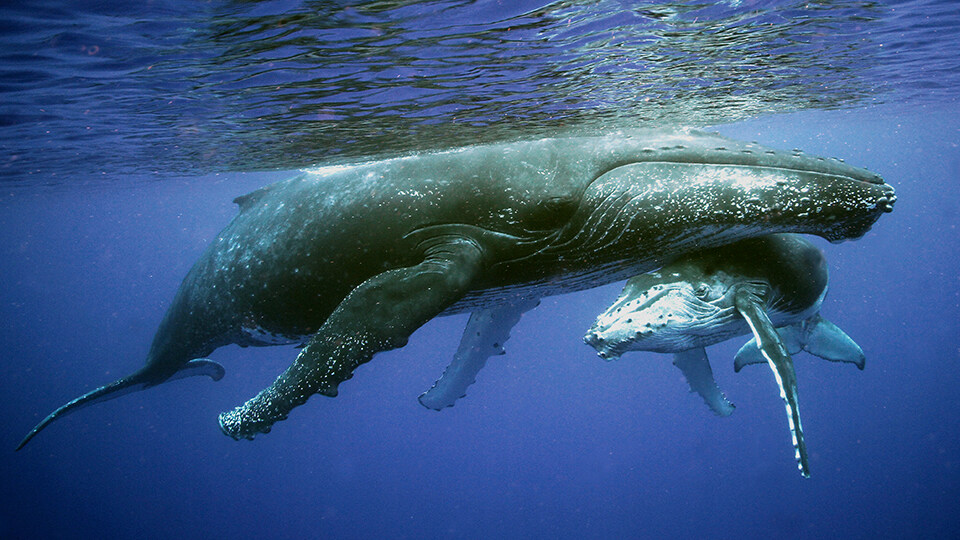 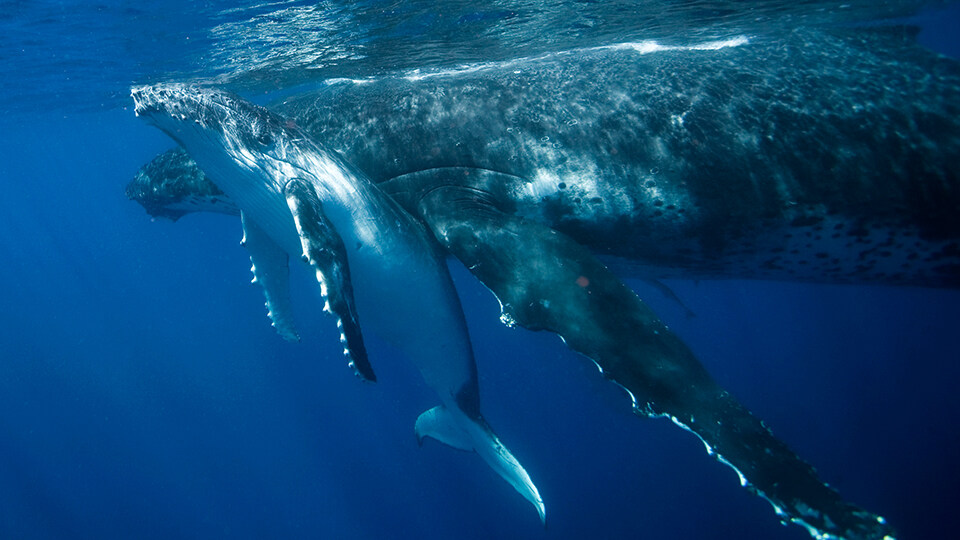 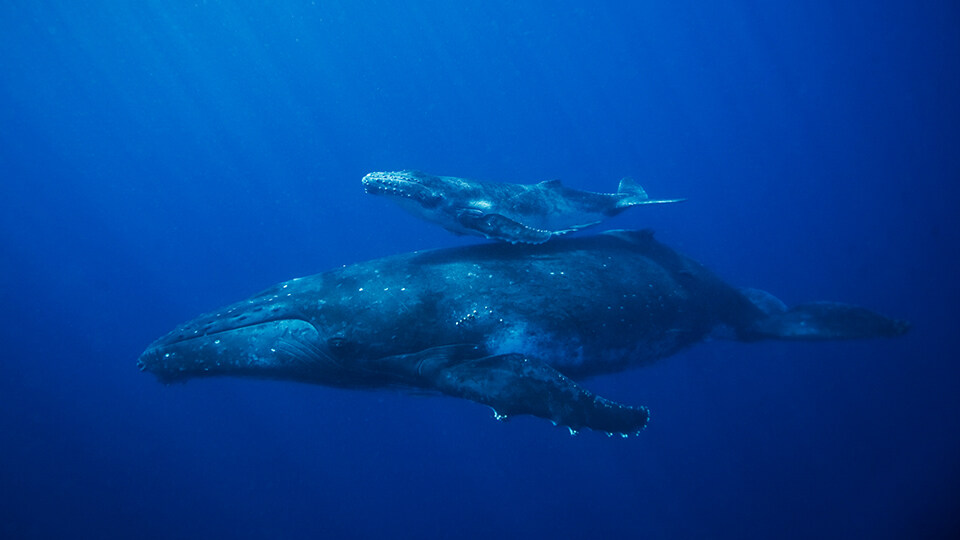 If you set out on a whale watching tour, you’ll have the opportunity to observe humpback whales and how they interact with each other. During the breeding season, the males often gather in a group of up to 20 individuals. They encircle a mature female, showing off their tail slaps and performing other acrobatics. Researchers believe that the males do this as a sort of demonstration of their fitness for mating.

Humpback whales also breach; it’s a breathtaking sight that looks like an impossible feat. Their powerful flippers propel them entirely out of the water. Although all whale species do this, humpback whales breach more frequently than other types of whales. You may also observe other interesting whale behaviors, such as tail slaps, pectoral slaps, and spy hops. These displays can last for hours! 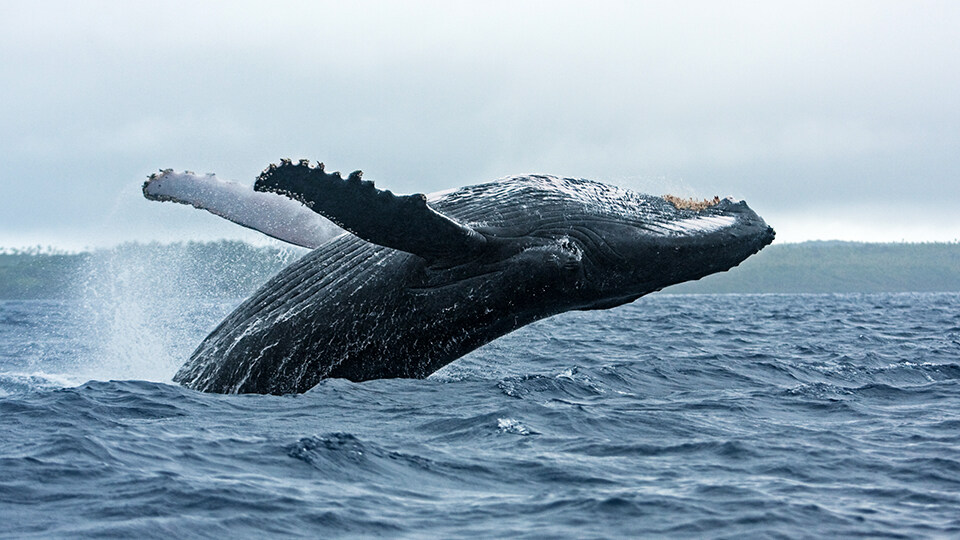 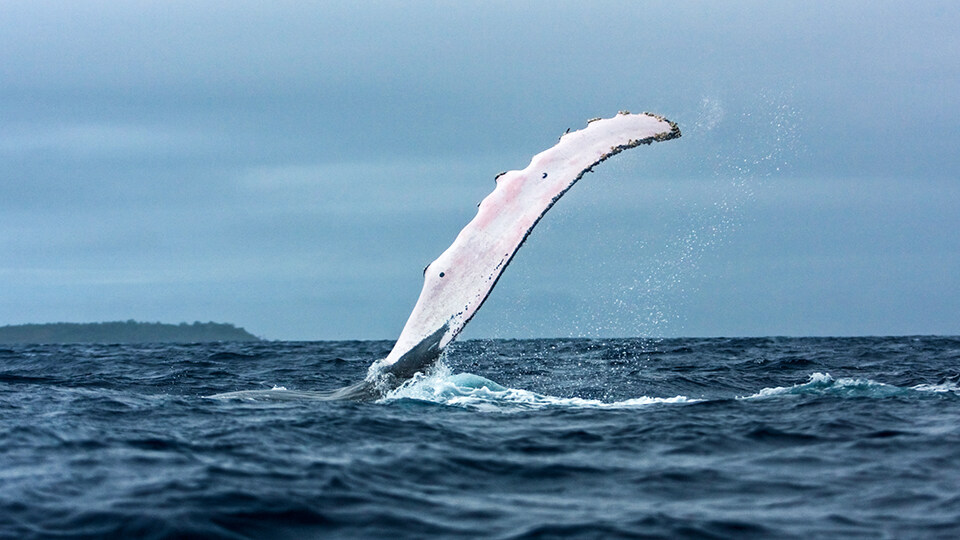 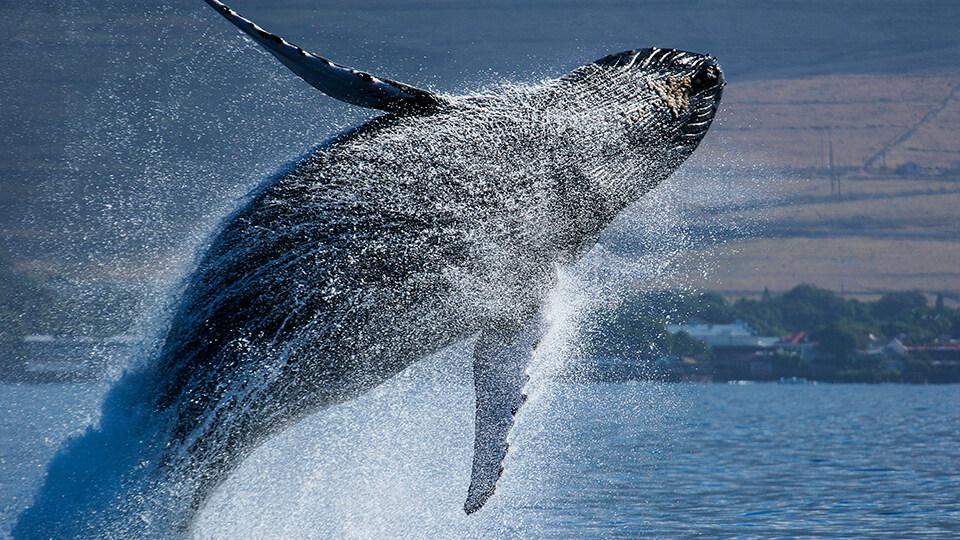 Adult male humpback whales create long, loud, and complicated sounds that scientists call the “whale song.” Most researchers believe that the song is related to mating behavior, but they’re not sure whether or not the males sing to show off their dominance and fitness or to set themselves apart from the rest of the group. Some researchers believe that the males who sing do not ever mate. In some ways, these prehistoric wonders are still a huge mystery!

A humpback whale song usually lasts for 10 to 20 minutes, but the whales will repeat it for hours. They all make the same sounds in unison, which results in a loud song that can be heard underwater and sometimes even at the water’s surface. If you’re on the deck of a ship during a Maui whale watching adventure, you may be able to listen to the song.

Over time, a group’s song gradually changes. In addition, the song sung by one group of adult male humpback whales will differ from the song sung by another group. This may also help females identify males who are related to them.

View More about What Is the Whale Song? 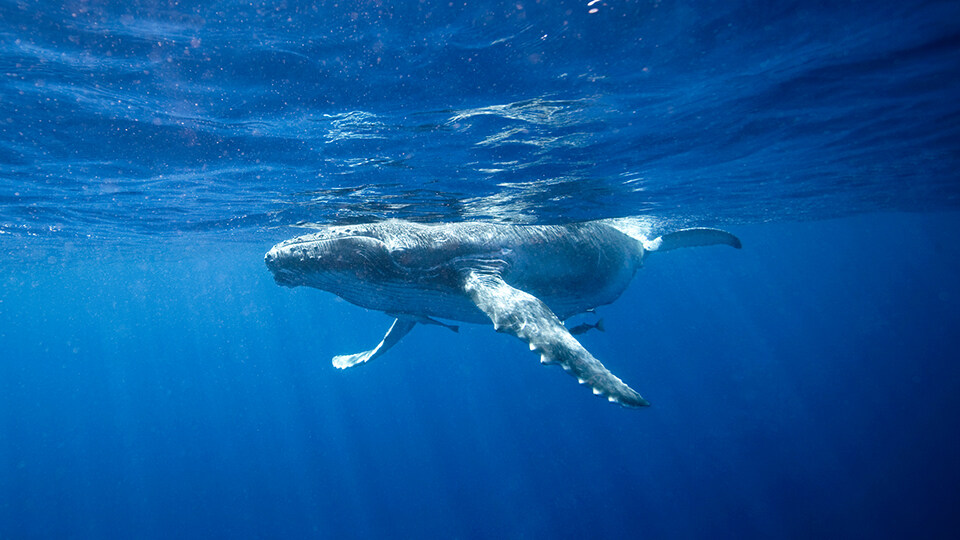 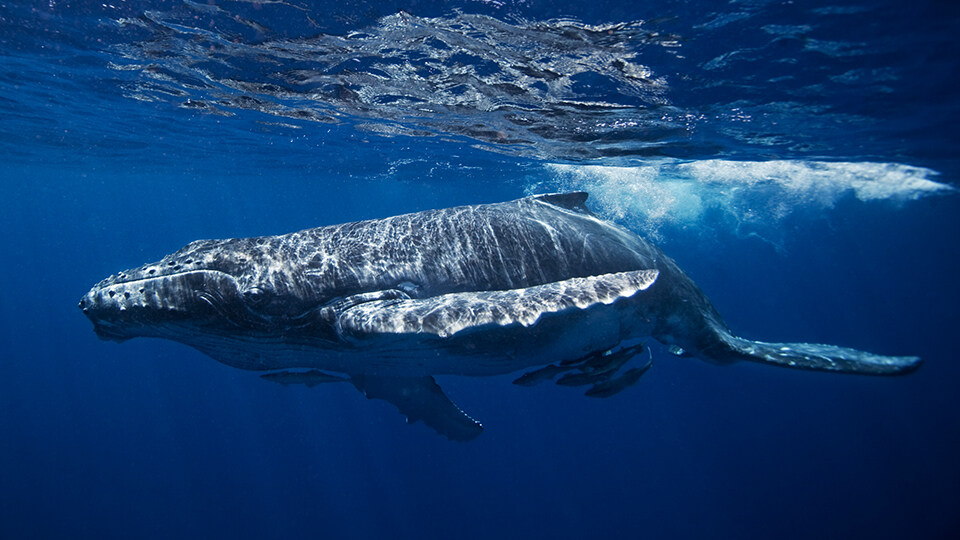 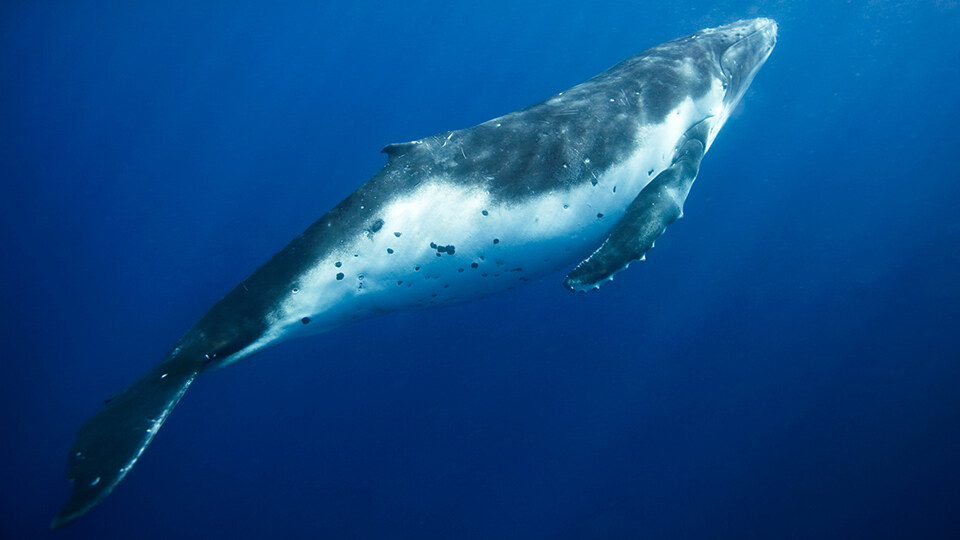 The EPA designates the North Pacific Humpback Whale as an endangered species. It has this designation across its entire range per the Endangered Species Conservation Act of 1970. Another law that protects the humpback whale is the Marine Mammal Protection Act of 1972. The International Whaling Commission prohibited commercial whaling in 1985 when it instituted a moratorium on harvesting whales for their oil and body parts.

About 30,000 humpback whales currently swim in the Central and North Pacific waters. The humpback whale group that spends winters in Hawaiian waters is growing by about 7% each year. This is excellent news and proof that conservation efforts are working. 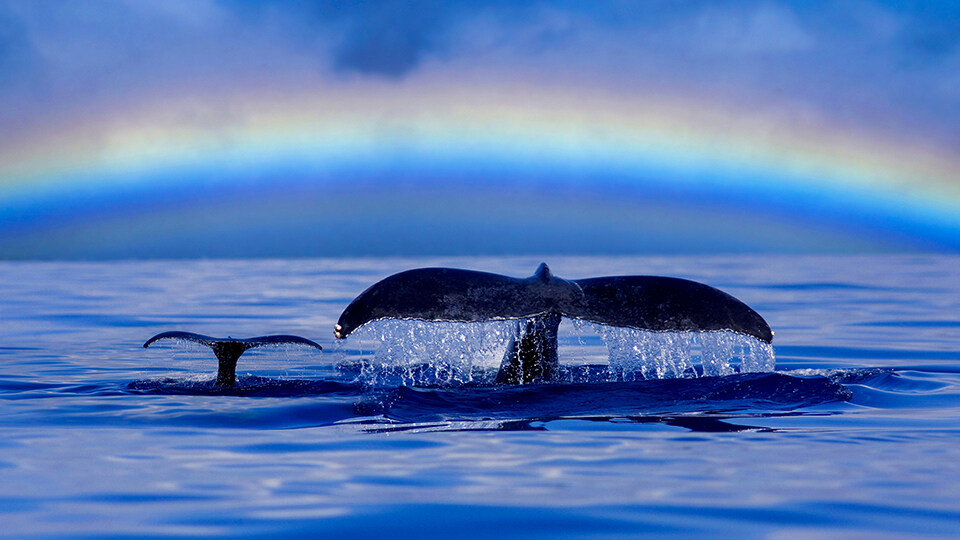 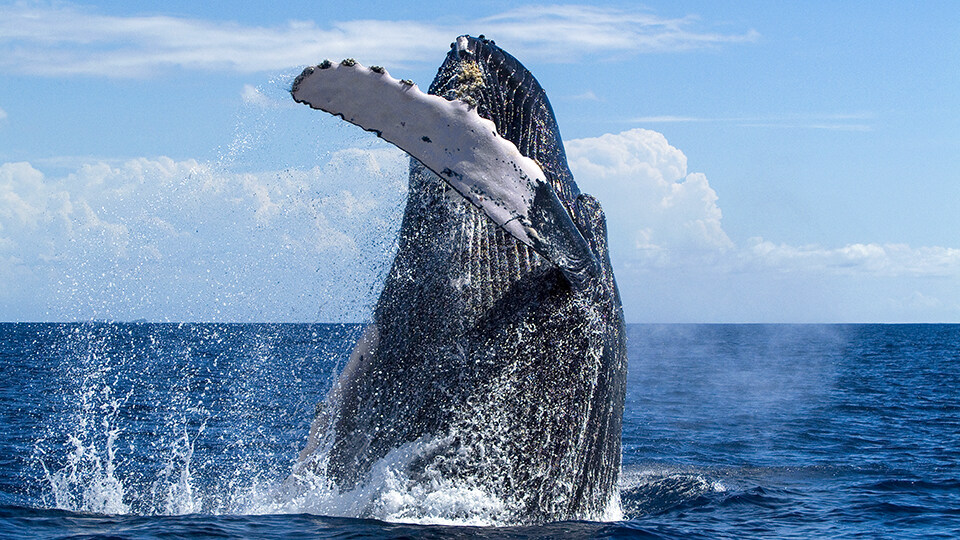 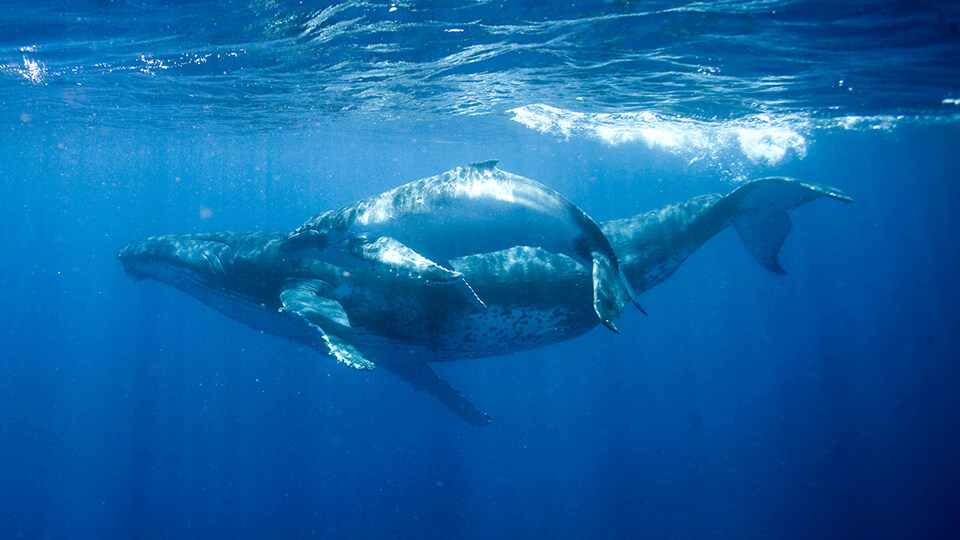 In addition to viewing humpback whales when you travel to Hawaii, you’ll have the chance to see more marine life. Many other large mammals travel alongside humpback whales in the beautiful waters surrounding Maui, Hawaii, Oahu, and Kauai. One of the mammals you might see traveling with them is the spinner dolphin. They’re known for their ability to breach and perform up to seven turns or flips in the air before they dip back beneath the surface. Scientists have discovered that spinner dolphins complete their acrobatics to create acoustic signals to other dolphins and marine mammals. They may also perform the flips to get remoras and other parasites off their bodies.

Dolphins and humpback whales may also enjoy a social or playful relationship. Several years ago, whale and dolphin watchers snapped a now internet-famous photo of a dolphin riding piggyback on the forehead of a humpback whale. The Whale and Dolphin People Project, an advocacy group for marine mammals, posted the photo on its social media and marketing materials to demonstrate how different species cooperate and socialize. 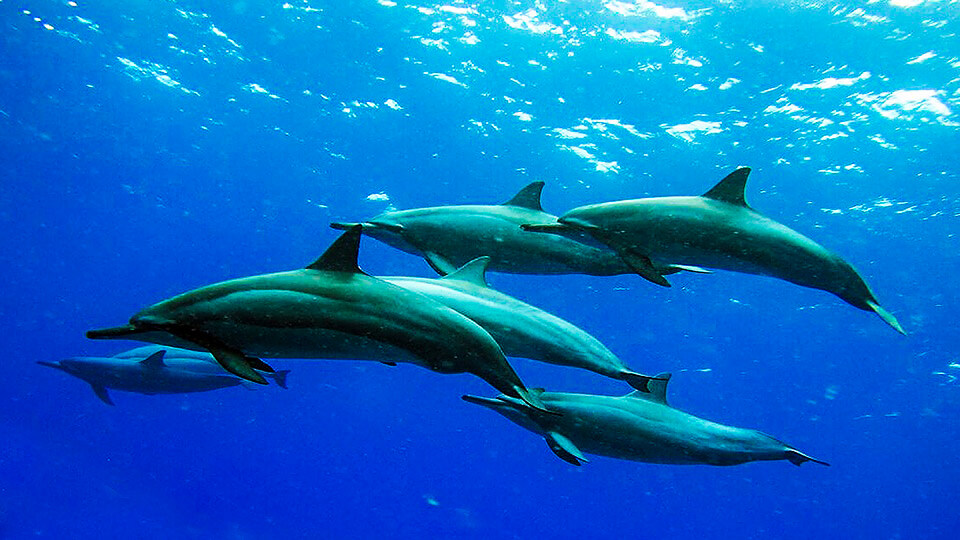 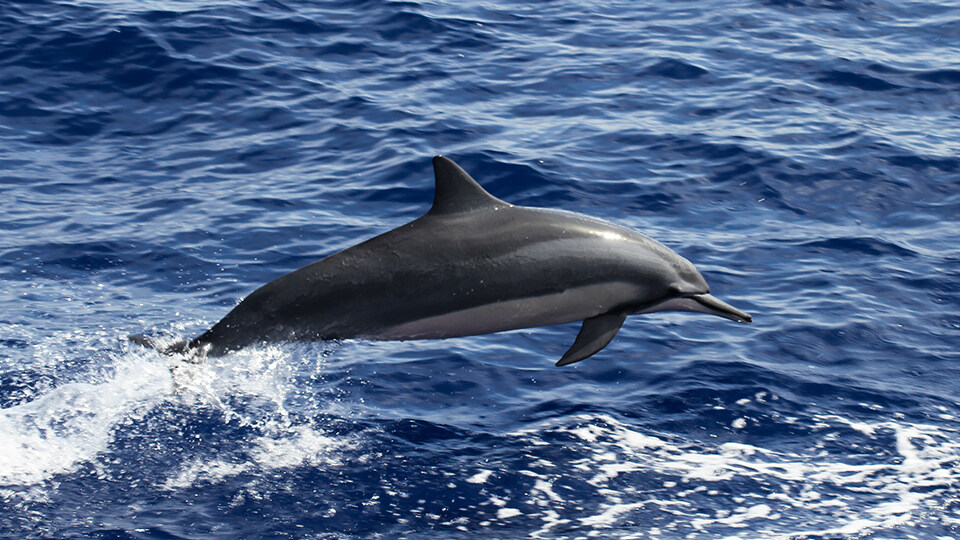 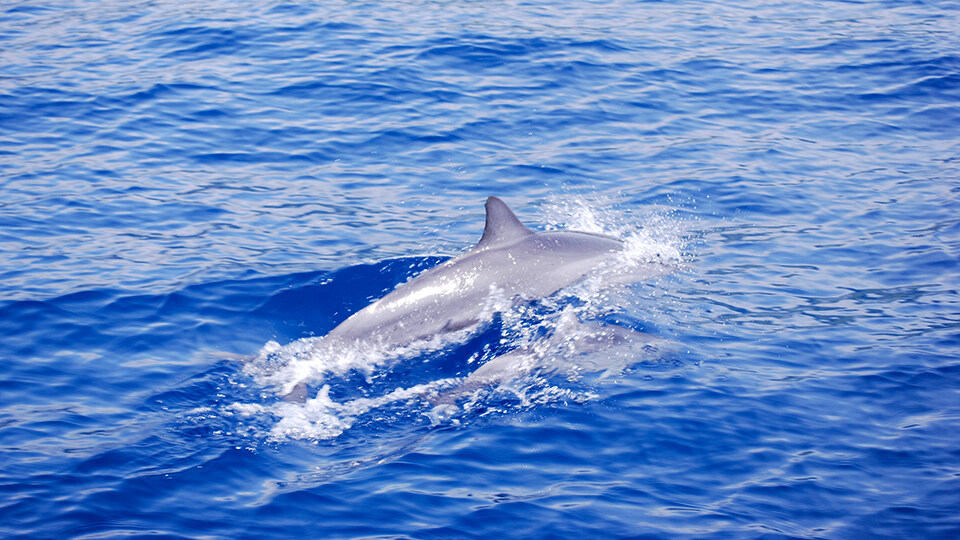 You can view humpback whales from the southern and western coastlines of Maui. The top spots on Maui from which to view humpback whales are the West Maui and South Maui coastlines. You can see them from the beach, but consider a Maui whale-watching tour for the best view. Experienced captains carefully navigate Maui’s waters so that whale watchers can get close enough to see the exquisite humpback whales in their natural environment, while maintaining a safe distance to prevent any injuries to the whales or other marine life, including the dolphins who often travel alongside the whales.

Humpback whales are active during the day. They’re easy to spot at sunrise and sunset, which are both busy socializing times for the pods. The peak time of the year for Maui whale watching is from mid-January to March. The weather is mild, the water tends to be calm for Maui ocean activities, and the whales have returned to their breeding and calving grounds.

If you’re planning a trip for a winter Maui whale watching tour, you’ll also have the chance to spot the calves and observe some mating rituals. If you visit Maui in February, you’ll have the opportunity to attend the Maui Whale Festival, which celebrates the history, beauty, and lives of these beautiful marine mammals.

View More about Where Is the Best Place
to View Humpback Whales on Maui? 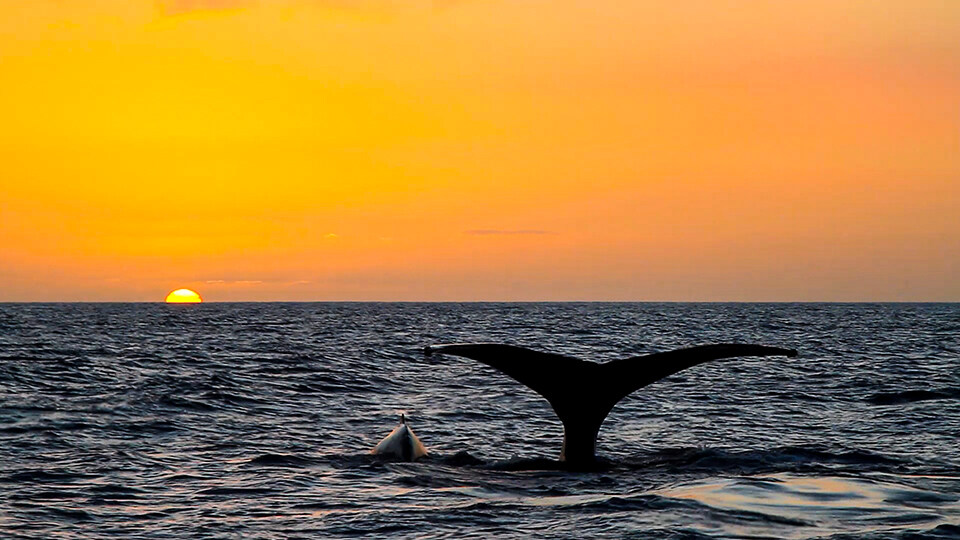 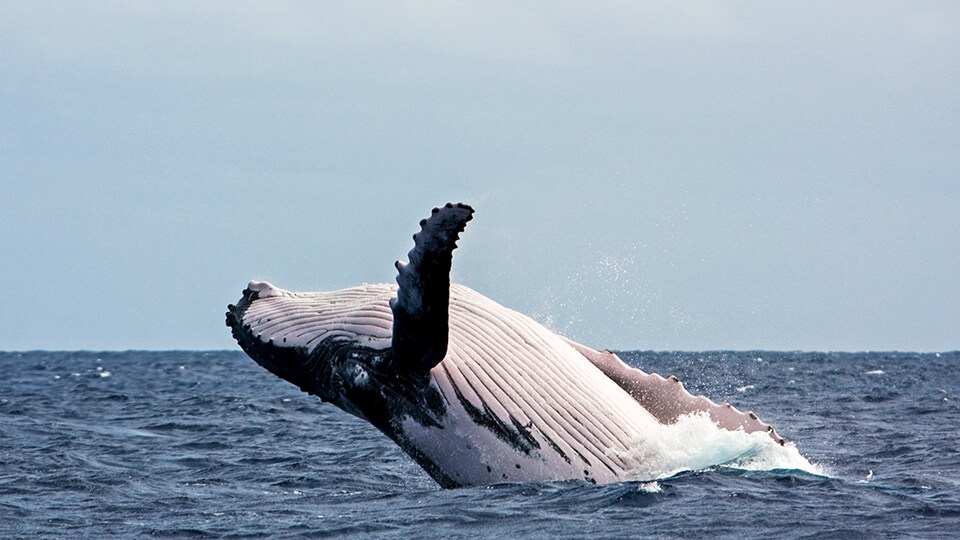 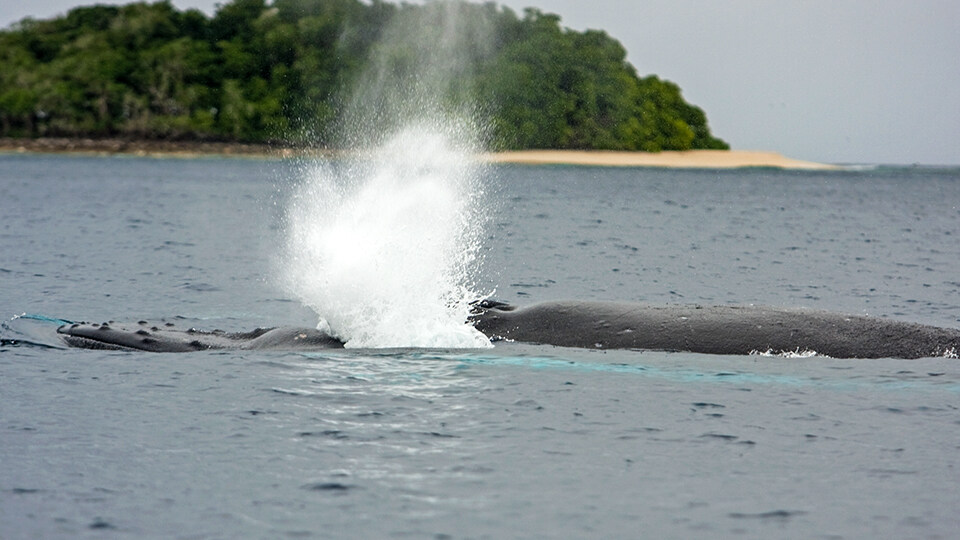 Without delay, visit our website to learn more about our tour availability, booking options, service, and more. 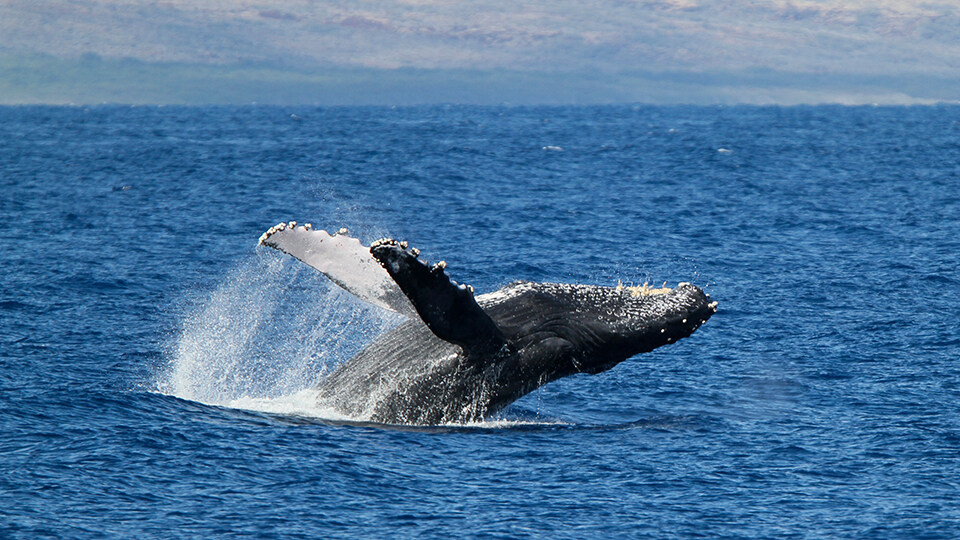 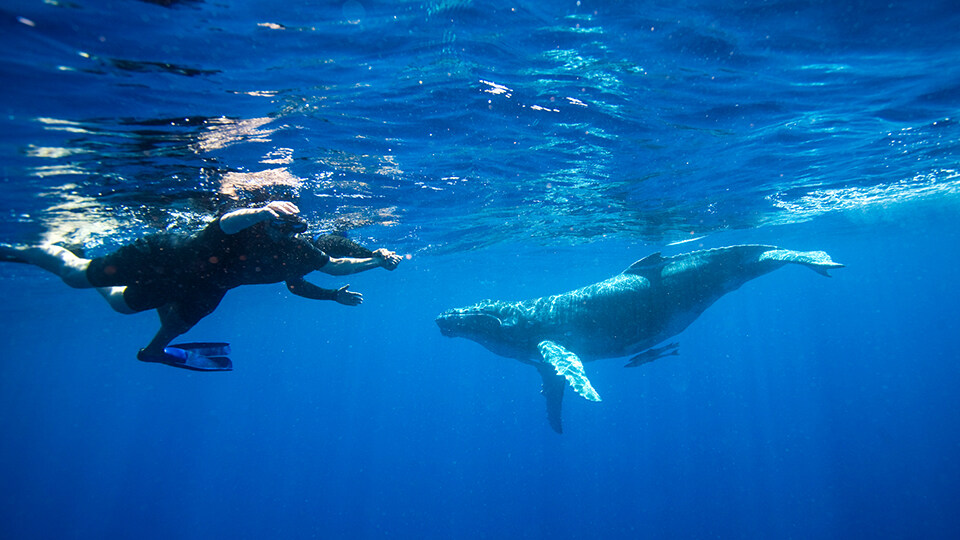 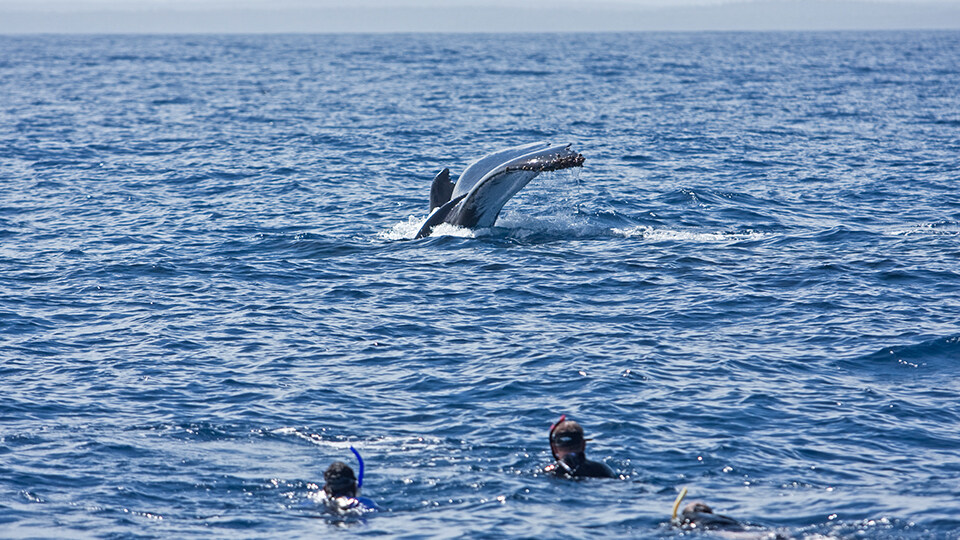 Mahalo for reading the Pride of Maui blog!

Mahalo for reading Pride of Maui’s Humpback Whale Watching on Maui FAQ! We look forward to seeing you onboard a Maui whale watching tour with us soon.

Alexandra is a marketing professional with a passion for writing about travel to the Hawaiian Islands, vacation rentals, and luxury real estate. She exposes readers to glimpses of 'Old Hawaii,' new destinations to explore, local events, and all the best things to do on Maui.

Get the latest news in your inbox

The Pride of Maui is a well-respected large catamaran known for her incredible ocean tours. Find more…

Stay up-to-date with all things Maui