Best animals
to see in Maui

Only two endemic mammal species were found throughout the islands, including the Hawaiian Monk Seal and Hoary Bat, along with more than 60 species of birds, a third of which are extinct today.

In addition to land animals, a new study also shows that coral reefs in Hawaii’s Papahanaumokuakea Marine National Monument contain the highest number of fish species found nowhere else on Earth. On your next visit, don’t miss the chance to explore the animals that make Hawaii so unique! 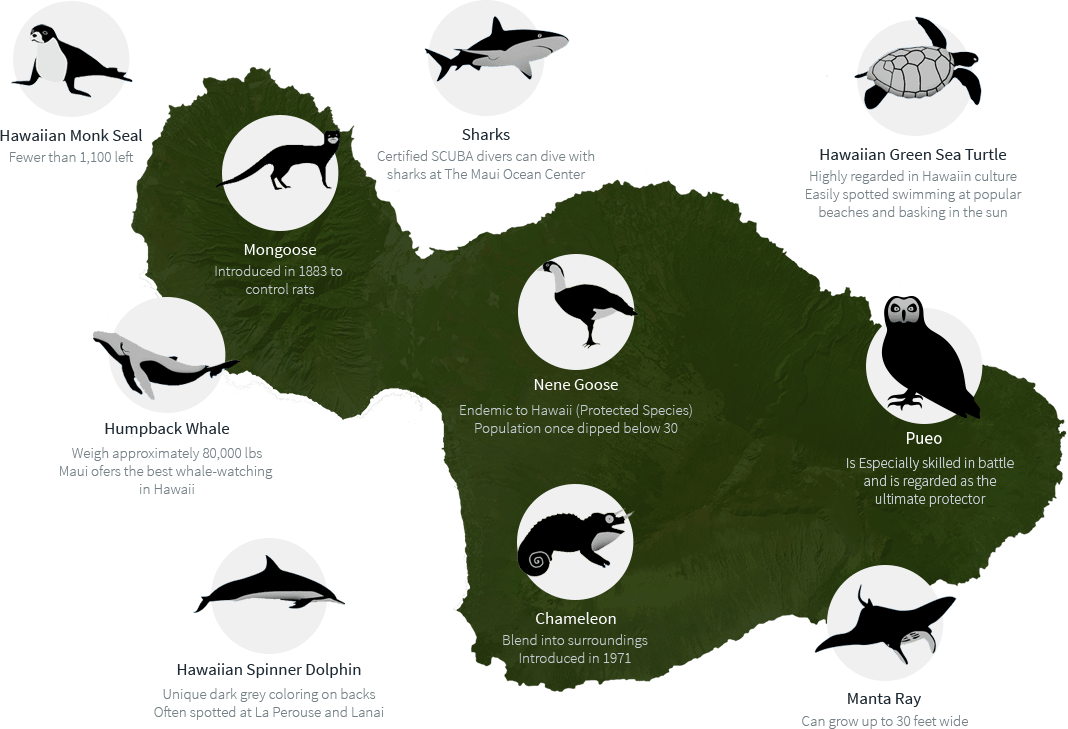 Everyone who comes to Hawaii falls in love with the honu, or sea turtles, that can be spotted swimming near the shore of popular beaches, eating algae off the reef, playing in waves and even crawling up on the sand to bask in the sun, a behavior that’s only been reported in Hawaii and Australia. Since their listing as a threatened species in 1978, the green sea turtle population has risen dramatically.

While touching, feeding, chasing and harassing sea turtles is against the law in Hawaii, swimming with them is a popular activity available for all visitors. We encourage guests to experience the beauty of our beloved honu during our special Turtle Snorkeling adventure. 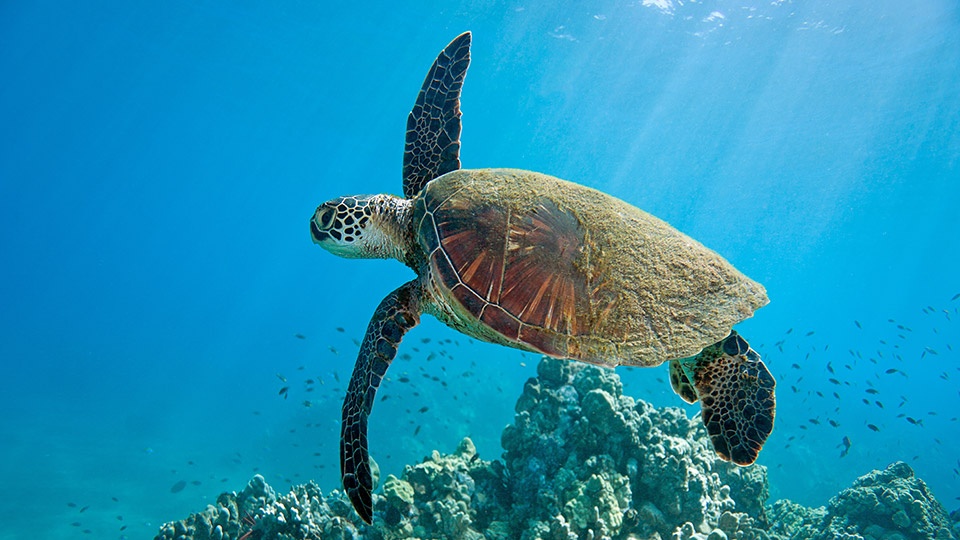 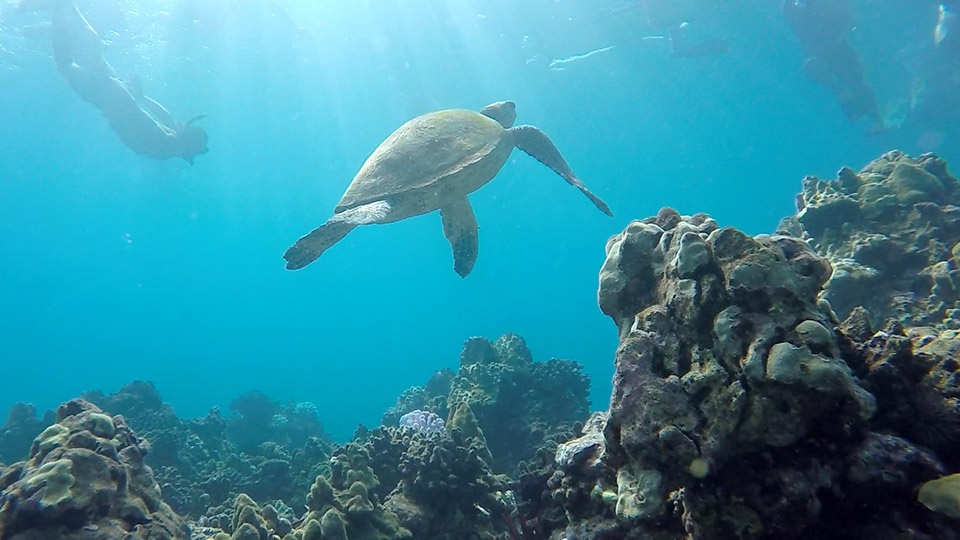 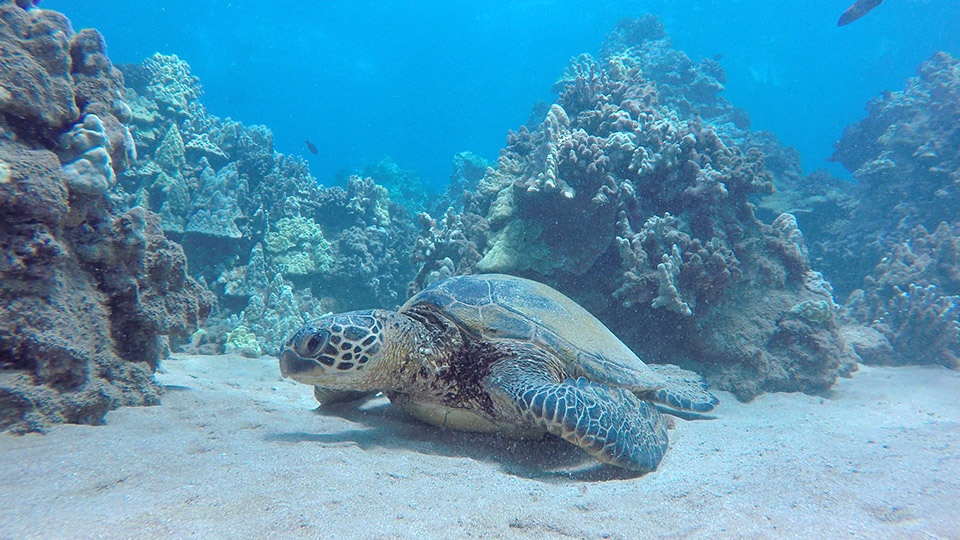 While sea turtles can be seen throughout the year, many visitors plan their trip to Hawaii specifically during Whale Season, which lasts from December to April. Each year, around 10,000 whales make the long trek from Alaska to the warm waters around Hawaii to give birth and nurse their young. All of the islands get their fair share of humpback whale sightings, but Maui enjoys its rank as the prime whale watching spot in Hawaii.

On your next trip to paradise, make sure to book a seat on one of our special Whale Watching Tours, where you’ll get the chance to witness behavior such as breaching, pectoral slapping, spy hopping, fluke up diving, tail slapping and more. 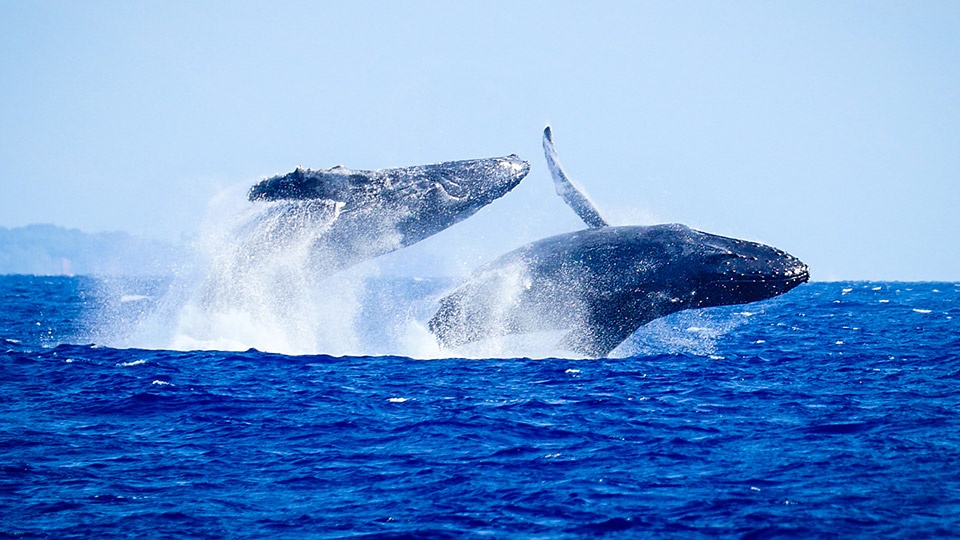 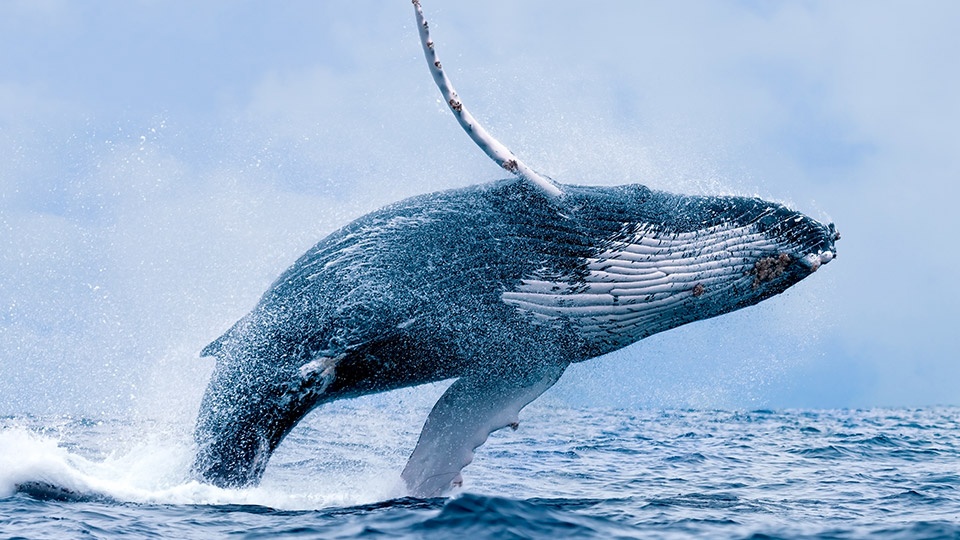 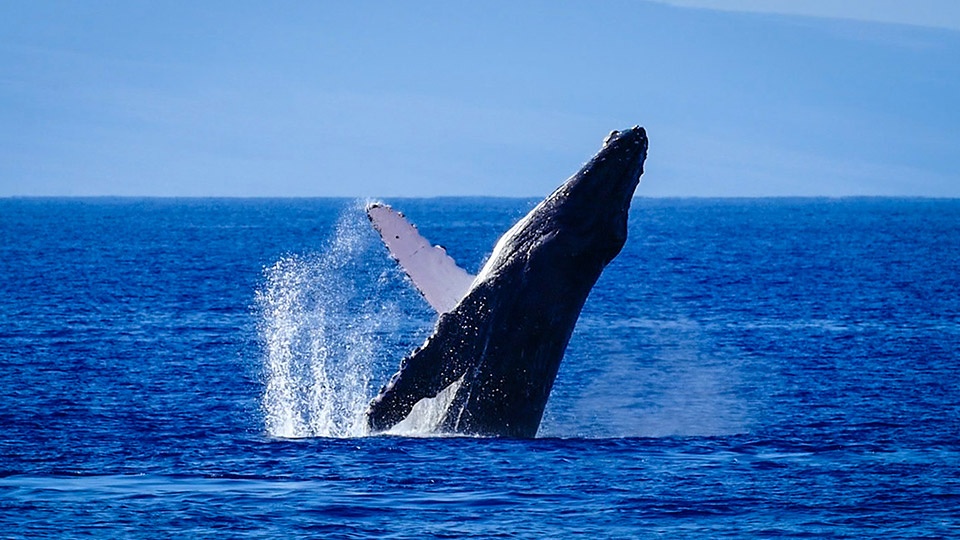 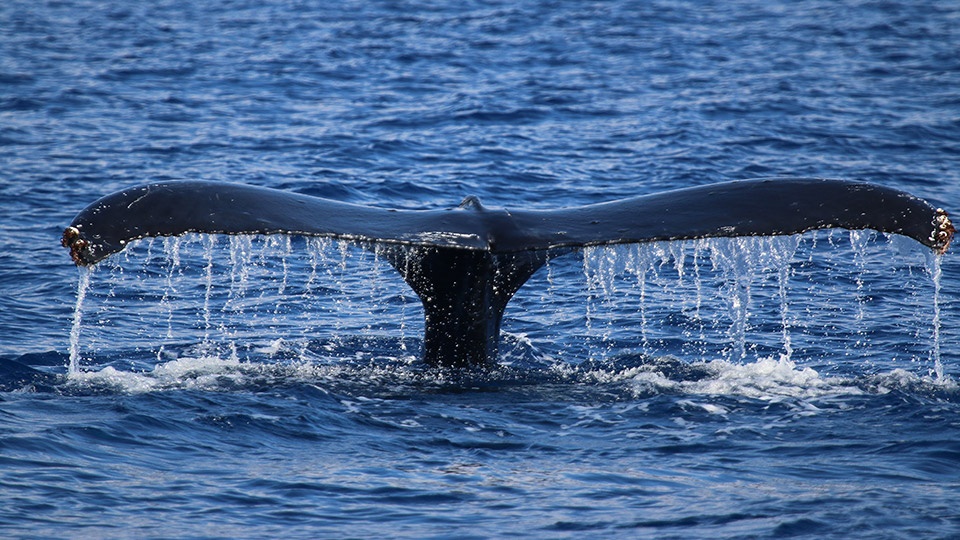 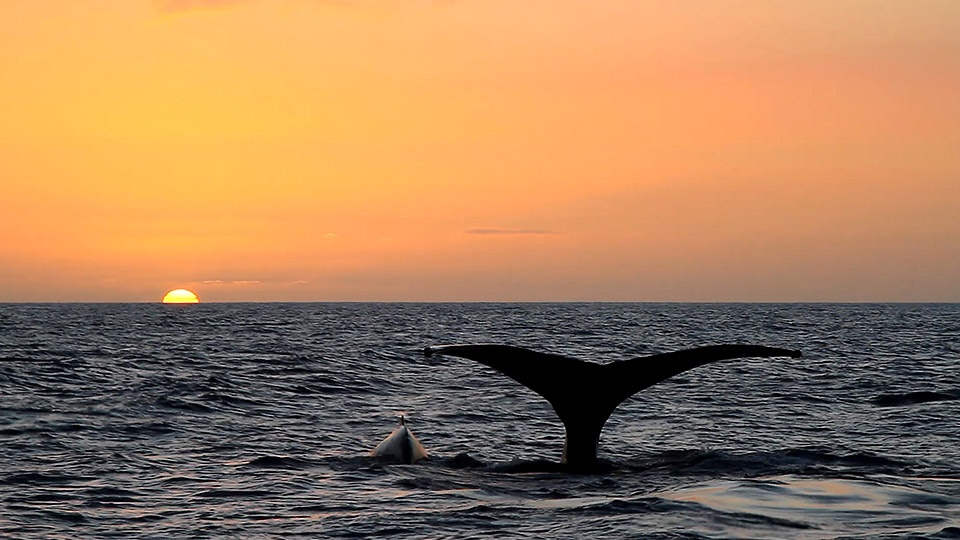 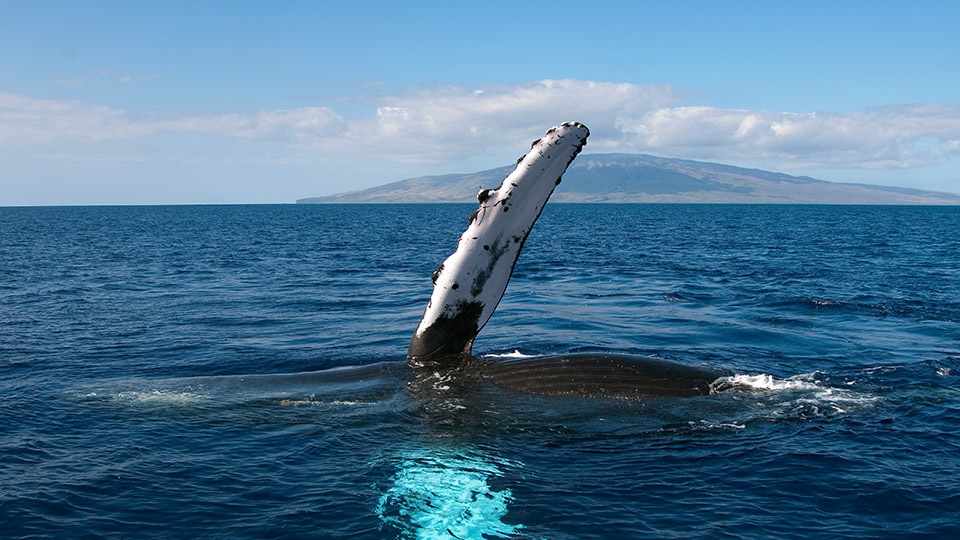 Called nai’a in Hawaiian, these friendly and beautiful animals enjoy the warm tropical water and shallow bays surrounding Hawaii. Four different species of the spinner dolphin exist, but Hawaiian spinner dolphins make up their own subspecies and are easy to spot due to the unique coloring of dark grey on their backs, a stripe of lighter grey on their sides, white or pink belly, thin beak and triangular dorsal fin.

Spinner dolphins can usually be spotted resting in shallow areas like South Maui’s La Perouse Bay during the morning before moving farther offshore to feed in the afternoon. Another popular hangout is off the coast of Lanai, where huge schools of spinner dolphins are seen regularly. The lucky few may even see some dolphins tagging along with the whales! 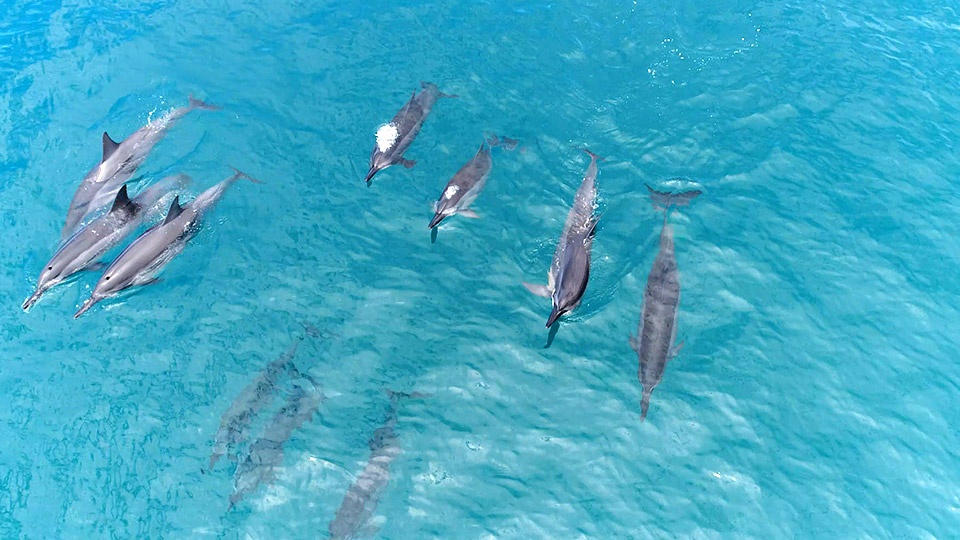 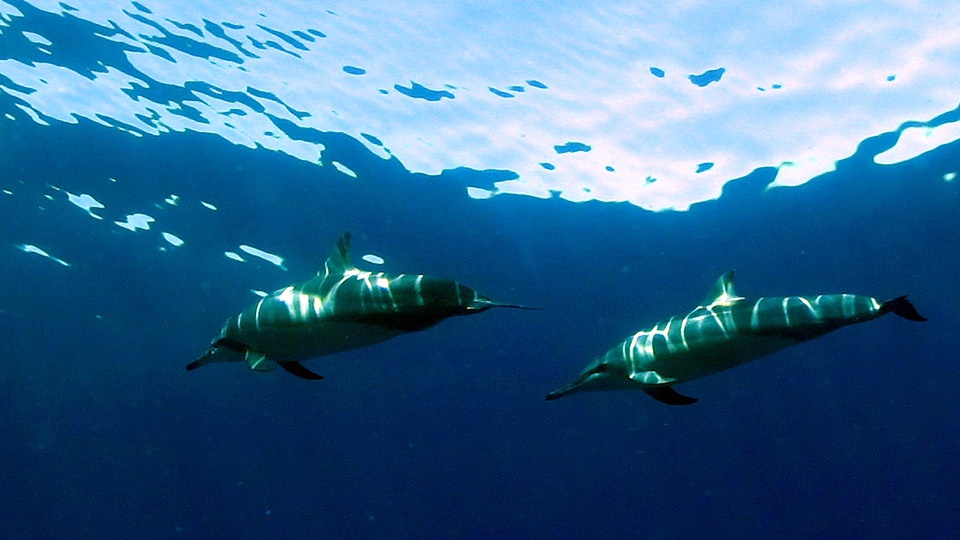 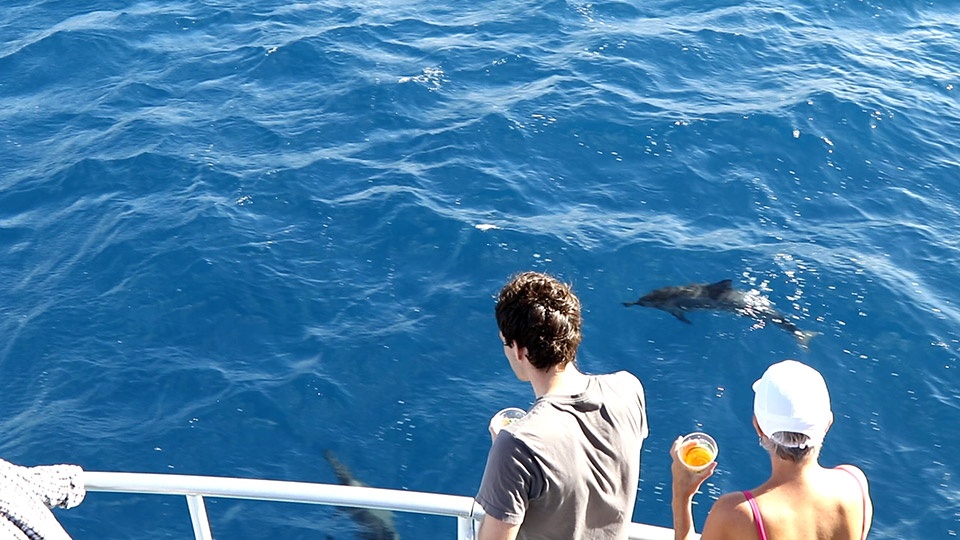 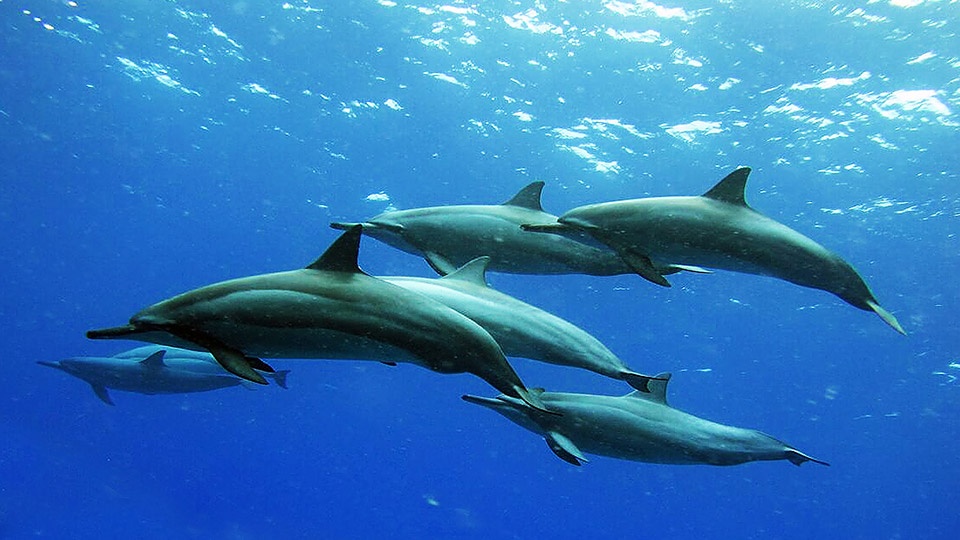 The story of mongoose in Hawaii really begins with the story of rats in Hawaii. In the mid 19th century, rats were running rampant in the sugarcane fields, destroying crops and multiplying quickly due to the fact that they had no natural predators on the island. After reading about a success story in Jamaica where mongoose successfully destroyed a large number of rats, mongoose were introduced into the Hawaiian ecosystem.

Unfortunately, rats and mongoose are on two very different time schedules, with rats being nocturnal and mongoose being active during the daytime. Not only did the mongoose not have much effect on the rat population, but they also turned their attention to the much tastier birds and bird eggs, further endangering many native bird populations, including the Hawaiian state bird, the Nene Goose. So while mongoose are certainly not celebrated in Hawaii, your chances of seeing one are still pretty great. 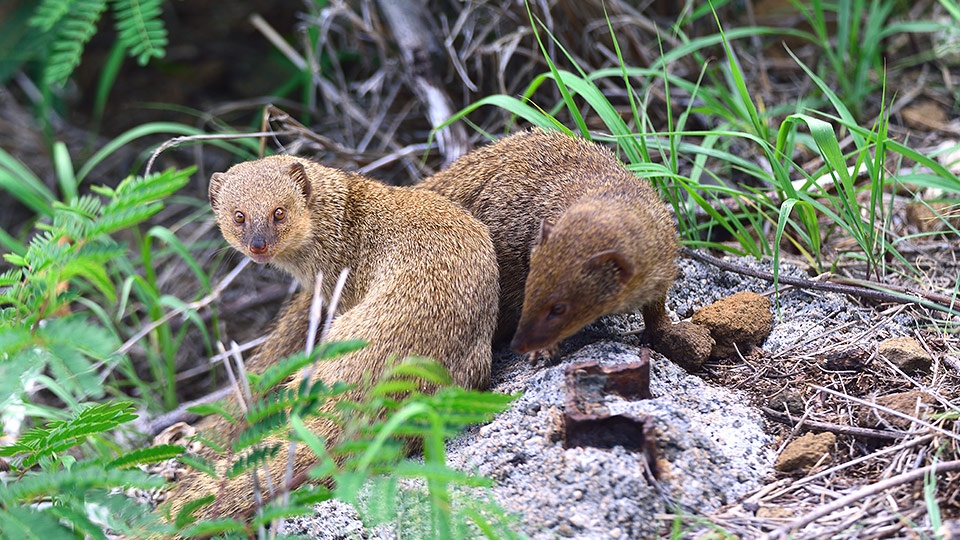 Endemic to the Hawaiian islands, the Nene Goose can only be found on Hawaii’s Big Island, Kauai and Maui. The state bird since 1957, the Nene’s population once reached a low of around 30 birds, growing slowly in population ever since due to their status as a protected species. They can often be seen in pairs or groups and are known to mate for life.

Nenes make loud honking noises and evolved from having fully webbed feet to clawed feet, better for gripping hard surfaces like lava rock. While the largest population can be seen in the Hawaii Volcanoes National Park on the Big Island, keep an eye out for the Nene goose on your next trip to the summit of Maui’s Haleakala Volcano. 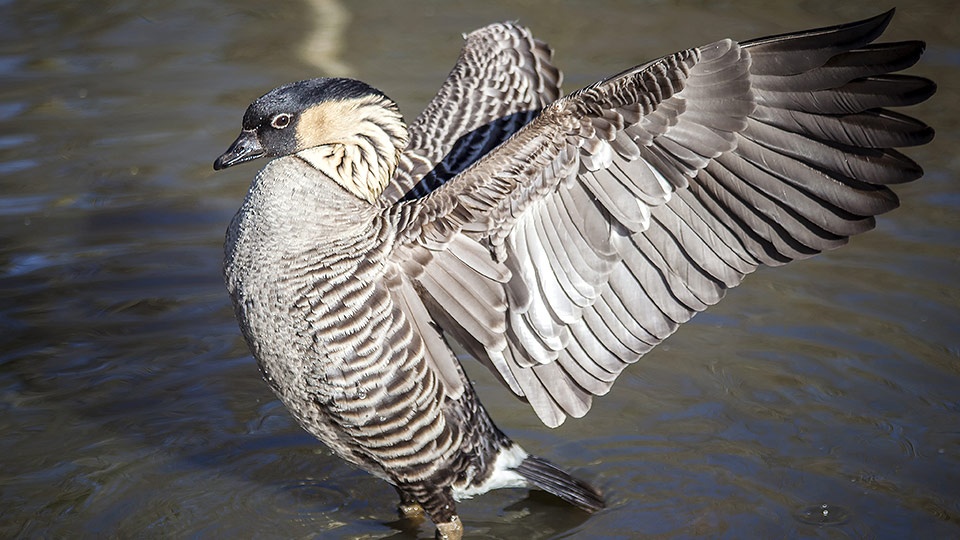 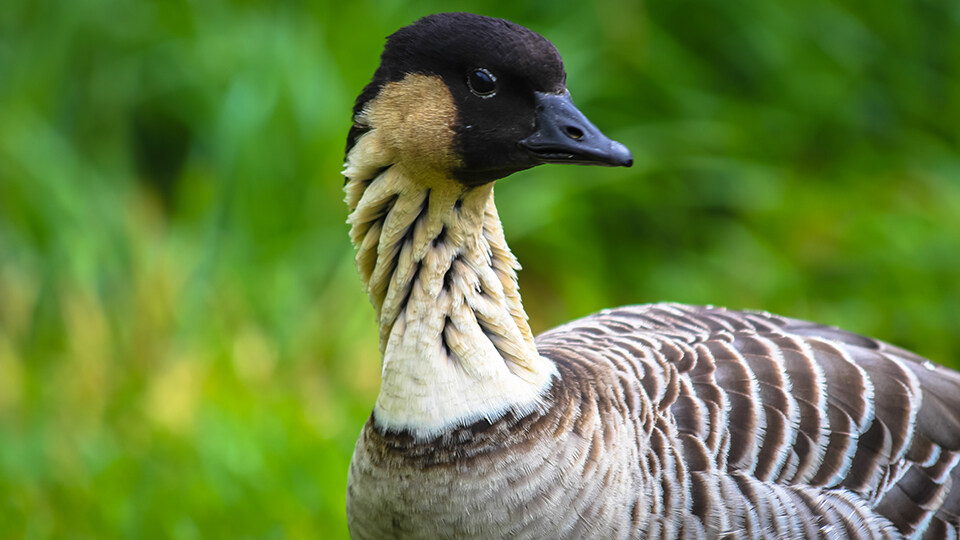 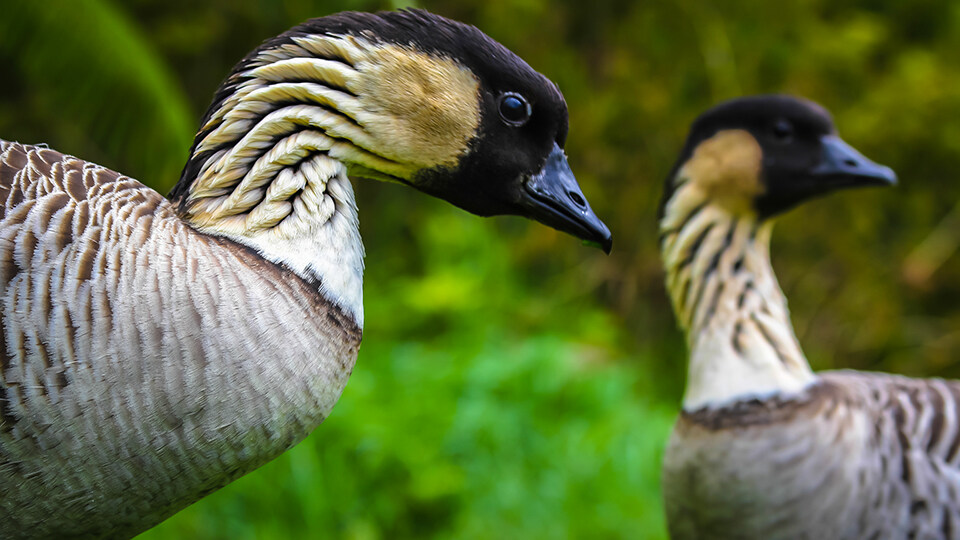 A species found only in Hawaii and believed to have been in existence for more than 13 million years, there are currently fewer than 1,100 Hawaiian Monk Seals left in existence. The official state mammal of Hawaii, the monk seal faces harsh survival rates due to a number of factors, including shark predation, habitat loss, marine debris, food shortages, disease and human harassment.

As of June of 2010, it is considered a felony to harm a Hawaiian Monk Seal, and many organizations throughout the islands are doing their best to keep this highly endangered species alive and well. Hawaiian Monk Seal sightings are rare, but they can sometimes be spotted basking on sandy beaches during the daytime. Learn more by reading Guide to Responsible Viewing. 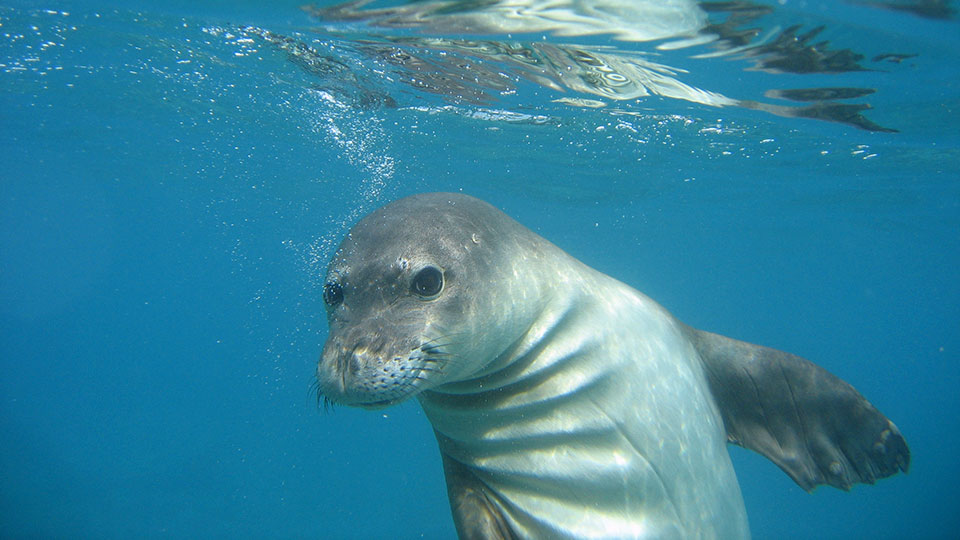 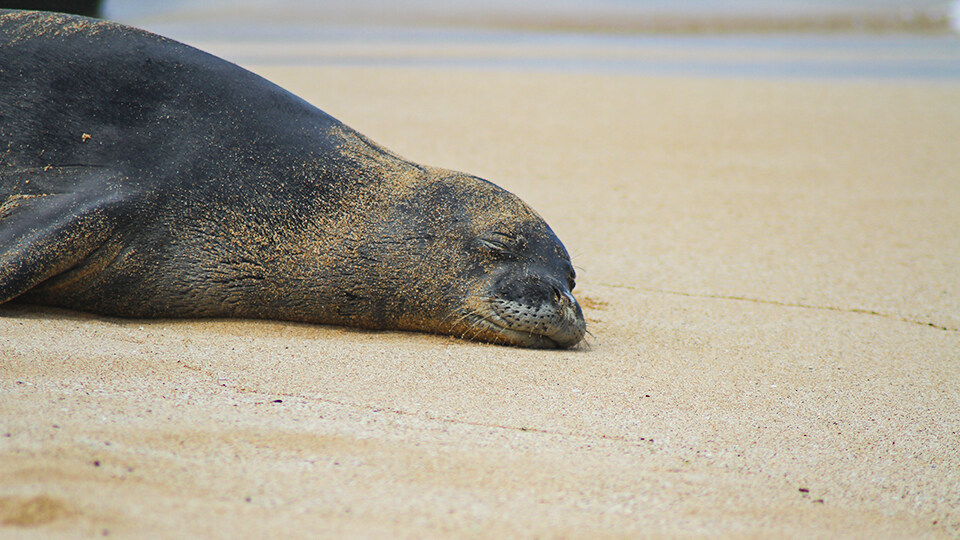 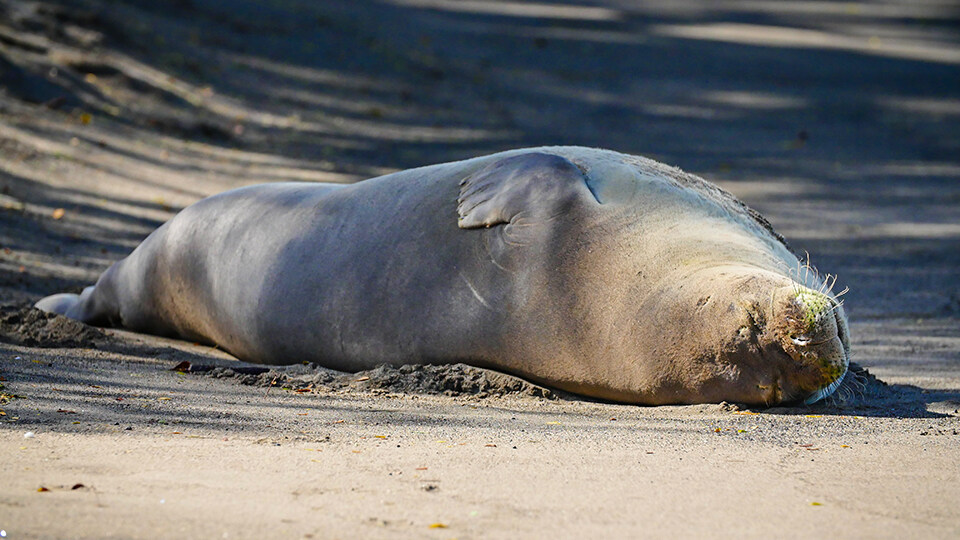 First introduced to Hawaii from Kenya and Tanzania in 1971, Jackson’s Chameleons soon established free ranging populations on Hawaii’s Big Island, Maui and Oahu. With their amazing ability to blend into their surroundings and thrive in a variety of forest environments, chameleons soon became another of Hawaii’s invasive species, destroying native species of insects, spiders and snails.

In Maui’s Upcountry areas of Makawao and Kula, chameleons can be spotted in forested areas, orchards and even on hedges in yards. Veiled chameleons have also become a problem, preying on native Hawaiian birds and insects, and were illegally introduced to Hawaii as pets. While it’s illegal to transport chameleons between islands, there is no law against shipping them to the mainland, which is why the majority of chameleons in the U.S. are said to be of Hawaiian descent. On your next trip to Maui, make sure to keep your eyes peeled for one of Hawaii’s most popular (and hard to spot) invasive species. 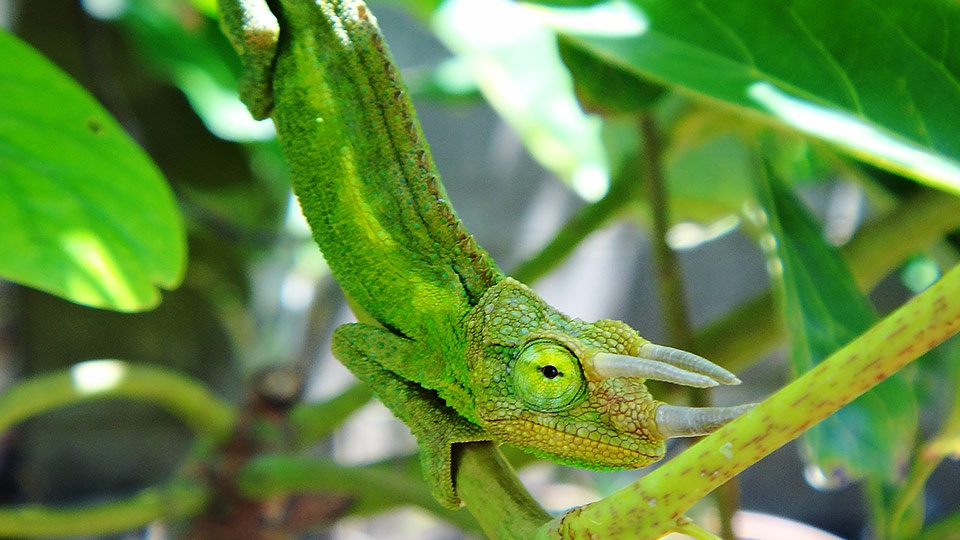 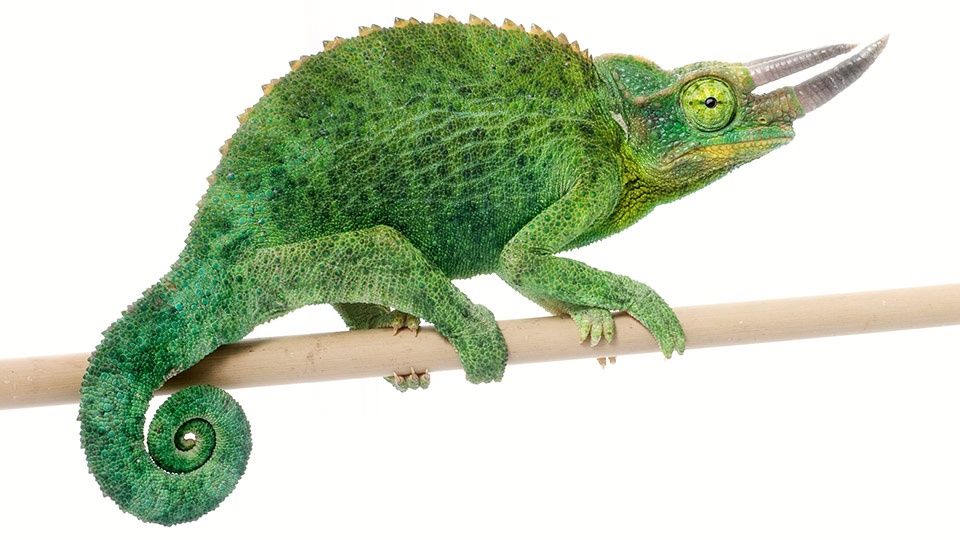 The Hawaiian Pueo is a short-eared owl that is endemic to Hawaii. With deep cultural meaning, the Pueo is found throughout the Hawaiian Islands, and can be commonly seen on Maui. On the Island of Oahu, the Pueo is actually listed as an endangered species.

In ancient Hawaiian history and culture, the Pueo is considered an ‘aumakua (ancestor). It is believed that they inhabited the Hawaiian Islands before the arrival of the ancient Polynesian voyagers. Other Hawaiian ‘aumakua are sharks, turtles, and centipedes. The ‘aumakua are believed to channel the spirits of the ancestors, each symbolizing a unique strength. The Pueo is especially skilled in battle and is regarded as the ultimate protector.

Pueo nest on the ground, and can be found in wet grasslands and dry forests. Unlike most owls, the Hawaiian Pueo are also active during the day. They can be seen soaring through the skies, hovering in flight over roadways at night, and perched on treetops.

These majestic Hawaiian animals are considered very sacred in Hawaii. They are guardians that belong to both heaven and earth and are perhaps the oldest physical manifestation of ‘spirit’ in ancient Hawaiian history. 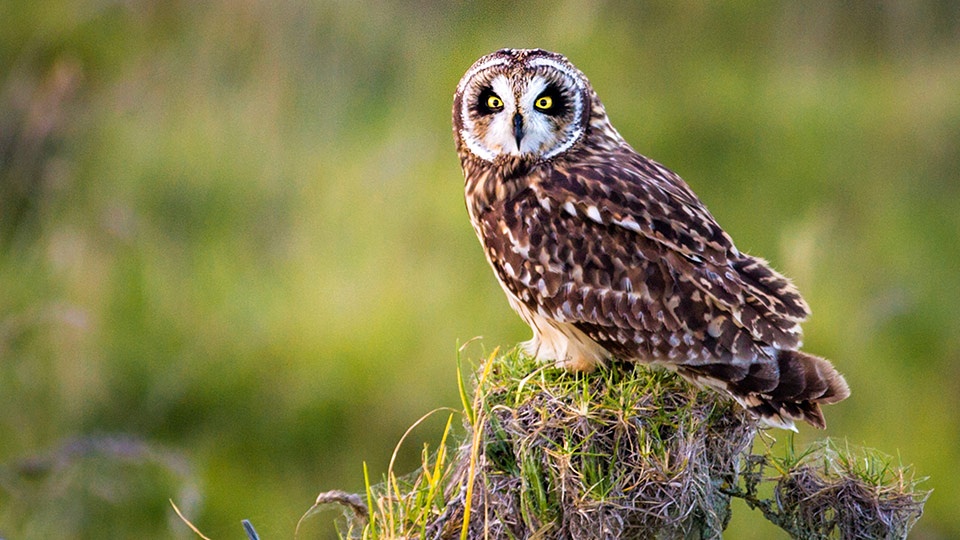 If you can’t make it to the Big Island for the manta ray night dive and snorkel off the Kona coast, you’re still in luck! Regarded as one of the most graceful and mysterious creatures in the ocean, manta rays can grow up to 30 feet wide and, unlike eagle rays and stingrays, have no stinger.

These friendly giants are the largest species of ray in the world and frequently found at cleaning stations, where smaller species of fish help remove dead tissue and unwanted parasites. On Maui, your greatest chances of seeing manta rays are at Olowalu, the largest and healthiest reef around Maui and location of the 4th largest manta ray resident population in the world. Home to over 350 manta rays, this is the perfect area for snorkeling or scuba diving on your next trip. 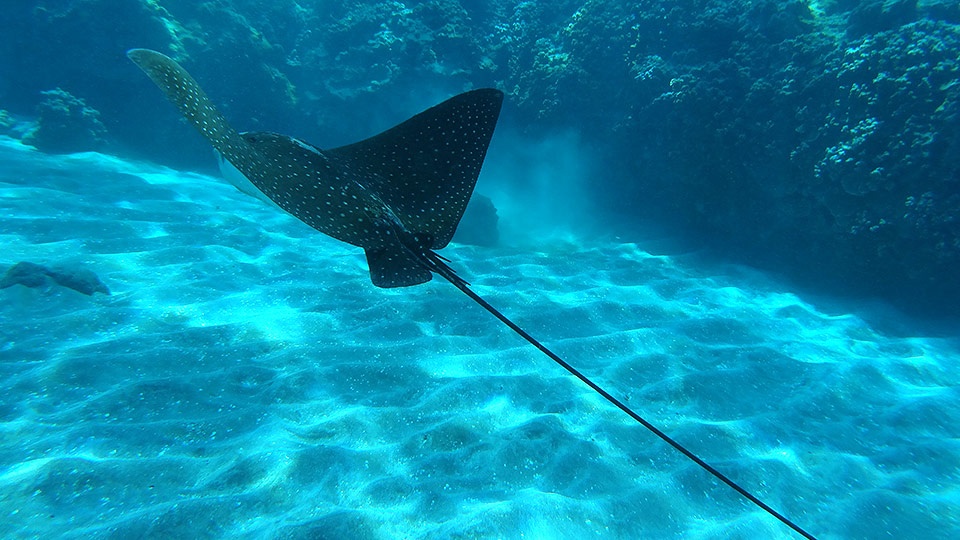 Sharks, or mano, have a long and intertwined relationship with Hawaiian culture. While Captain Cook reported the use of shark teeth for various ancient weapons, sharks were also commonly regarded as ‘aumakua, or family guardians and protectors. Today, sharks continue to play a vital role in the health of marine ecosystems and are highly respected in Hawaiian culture.

There are currently around 40 species of sharks found in the Hawaiian waters, 8 of which are commonly seen near shore, including whitetip reef sharks, blacktip reef sharks, sandbar sharks, scalloped hammerheads and tiger sharks.

Visitors to Maui can get up close and personal with these animals at Maui Ocean Center’s Shark Dive Maui, where certified scuba divers have the opportunity to dive with over 20 sharks in a giant 750,000 gallon tank. For those of you who would rather steer clear of them, remember to always swim with a buddy, don’t go out in murky conditions and stay away from areas where there is water runoff or fishing boats. Although Hawaii has received its fair share of negative publicity when it comes to sharks, remember that most attacks are simply a case of mistaken identity. Take proper precautions when in the ocean and enjoy the beauty of life under the surface. 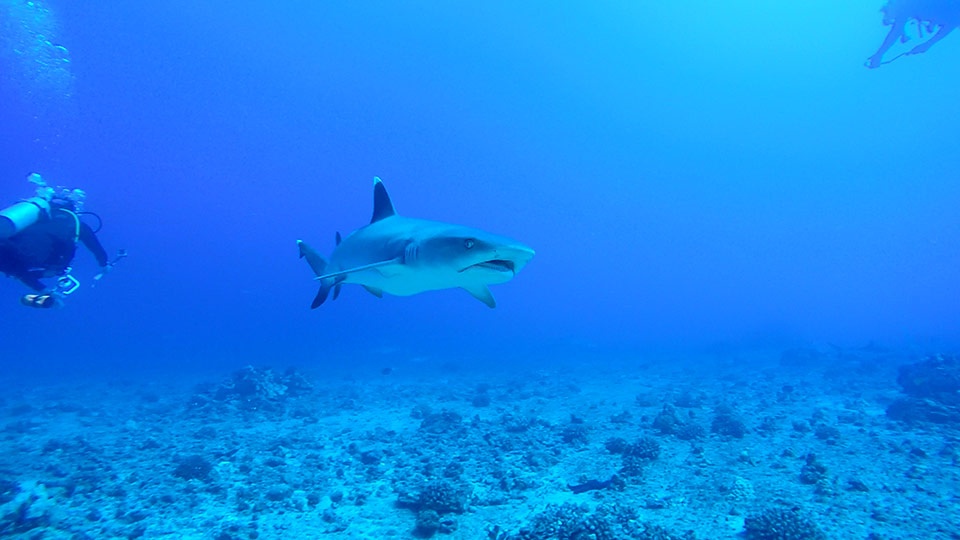 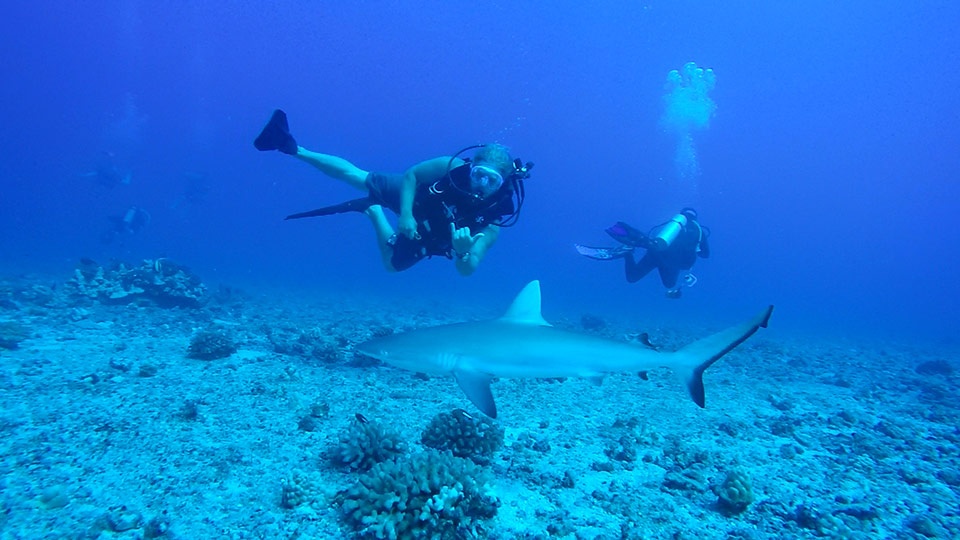 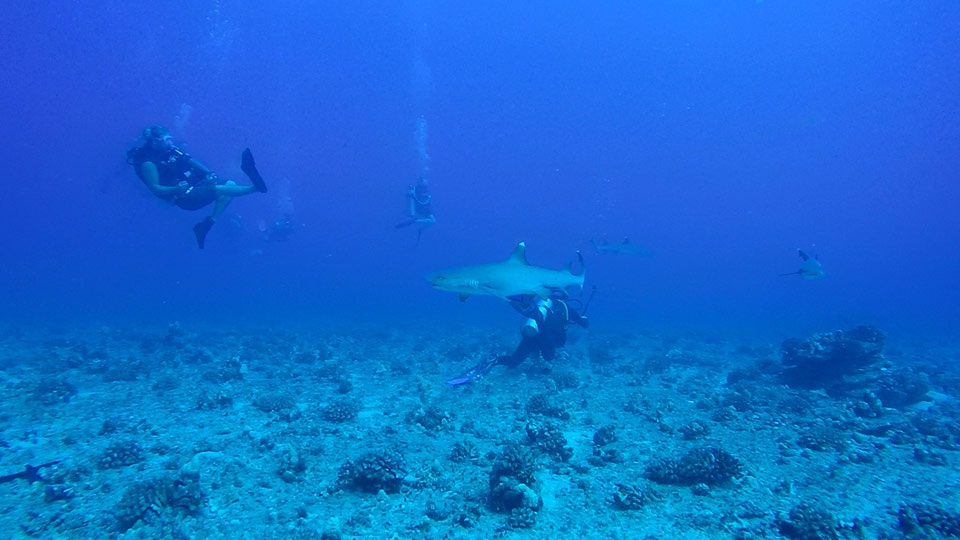 Mahalo for reading our Animals to See in Maui list!
What are your favorite animals to see in Hawaii?
Looking for underwater Maui species?
Check out this list.

We are local Maui guide experts and Hawaii enthusiasts who love to share the Aloha spirit and our favorite things to do on Maui.

Get the latest news in your inbox

The Pride of Maui is a well-respected large catamaran known for her incredible ocean tours. Find more…

Stay up-to-date with all things Maui